What you see in the article are representations of what the area under the yellowstone national parkone of the most famous and distinctive geyser sites in the world, according to a new study published yesterday in Nature. The study is probably the most accurate to date, and maps precisely the conduits that carry water and magma beneath the surface. The park rises above the Yellowstone caldera, which is the largest supervolcano in the world considered to be dormant.

To map all the ducts, the scientists did fly a helicopter over the caldera back and forth along parallel lines that were just 250 meters apart. On board the helicopter was an instrument sensitive to electromagnetic fields that allowed the precise measurement of resistance and susceptibility of the area below.

Crossing the variations of the data according to the position was possible recreate a model of the area down to a depth of a few hundred meters, really. All this was possible above all thanks to water, which is a very polar liquid that significantly alters the electromagnetic properties of each rock with which it comes into contact. This effect is further amplified by the minerals dissolved in the water. 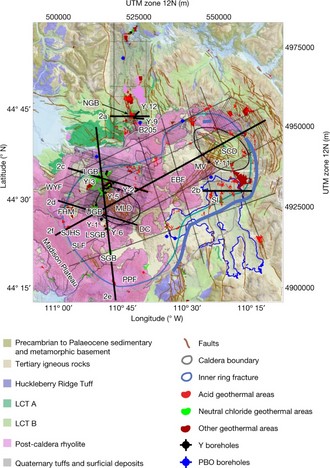 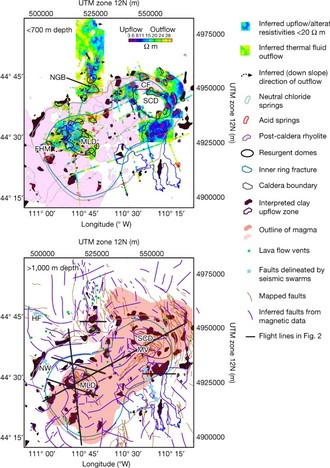 Previous representations indicated the presence of a homogeneous reservoir or a series of underground rivers, but the reality is much more multifaceted than that. The water infiltrates the rocky material where it finds spaces or even just permeable material such as clay. Indeed, it emerged that some of the areas from which the water vapor originated, which then becomes a geyser when it reaches the surface, were not directly under the fields.

In many cases, water encounters its main obstacle just below the surface – a consolidated layer of lava that is impermeable and impossible to “pierce” with just pressure. This move also allows you to create les hot pools typical of the park, after the boiling water is combined with cold water. Previous studies have concluded that the magma chamber that heats all the water is simply huge: 88km long by 29km wide for a depth of between 5 and 14km.