A new chapter is about to arrive in a story that began in 2004, that of World of Warcraft, one of the titles that most marked the videogame horizon of the last twenty years. And although MMORPGs are no longer on the crest of the wave as they were ten years ago, due to the rise of free-to-play experiences like Fortnite battle royale, WoW is still alive and well, and ready to welcome a new and flaming – it is appropriate to say, given the centrality of dragons – expansion.

A year and a half after Shadowlands, which arrived at the end of 2020, with a dedicated event yesterday afternoon (Tuesday, April 19), Blizzard has in fact removed the veil on Dragonflightand as usual he introduced the expansion with one spectacular trailer with a cinematic cut.

From the name to the video, everything in Dragonflight talks about the protagonists of the narrative, namely the dragons. It is no coincidence that the main location will consist of the Dragon Isles, which will be divided into five different areas with their respective biomes – one introductory and four dedicated to leveling. And, again not surprisingly, the new breed introduced by the expansion is that of Dracthyrdraconic creatures but with a humanoid appearance linked to thebrand new Evoker classwhich will be exclusive to them.

The Evokers will start as the Death Knights at level 58 (with the choice of joining the Alliance or the Horde) and will be able to take advantage of characteristics and abilities typical of dragons – such as flying and breathing flames, that’s right – and specialize in favoring the branch from DPS at a distance, or as a healer to support allies during fights with heals and upgrades.

And speaking of flight, one of the main innovations introduced by Dragonflight is the Draconic Flight, a way never seen before to plow the air on the back of your dragon that can obviously be customized and trained to perform increasingly complex and dizzying aerial evolutions.

WHEN DOES IT COME OUT? 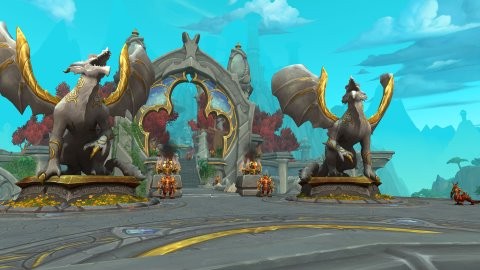 In addition to the firsts, Blizzard also promised that Dragonflight will be one of the most important updates in the long history of the game to the systems of talents and professions which form the fundamental framework: at the moment we do not have all the details, but we know that the goal is to provide players with a new degree of freedom and depth in the personalization of their characters. And on the other hand we don’t even know when Dragonflight will come out: there is no date for nowand we only know that there should be news about alpha in the near future.

Below we present the aspects of Dragonflight that Blizzard has chosen to underline in the official press release released in these hours:

WRATH OF THE LICH KING CLASSIC IS COMING SOON

Who does not die sees himself. And the Lich King, surely, has a relationship with death, not a foregone conclusion. Blizzard has not only thought about WoW’s future but also about his past, and so on the sidelines of the Dragonflight presentation came a news that will surely warm (or rather freeze?) The hearts of long-time fans: this year, in fact, the Classic version of the historic expansion Wrath of the Lich King will be availablealthough even in this case we don’t have a precise date yet – but a nice cinematic trailer, yes.

Also in this case, we report the information released by Blizzard through the official press release:

Return to the frozen continent of Northrend in World of Warcraft: Wrath of the Lich King Classic