It is probably the most symbolic animal of the dinosaur era, the predator par excellence that has dominated prehistory and there is no human being on the globe who hasn’t heard of it at least once, let’s talk about the famous Tyrannosaurus rex, or more commonly known as T-rex in the abbreviated form, or simply tyrannosaurus if we want to use the classic Italian definition.

Decades of studies of the remains of these animals by paleontologists around the world reveal that they dominated the Upper Cretaceous and lived roughly in the North American area about 65 million years ago. Although in the collective imagination the T-rex has always occupied the first places in the ranking of the most ferocious predators, it has a characteristic that over the years has led it to be the subject of an endless list of memes and ironic observations towards it, namely the conformation and the size of his arms.

The Tirannosaurus rex probably boasts one of the most balanced ratios in the dimensions of the arms compared to the body ones and, hilarity aside from this characteristic, paleontologists and biologists from all over the globe are still wondering why evolution has brought this dinosaur to the distinctive feature, as well as the role that the small limbs may have retained, which for many are considered atrophic. 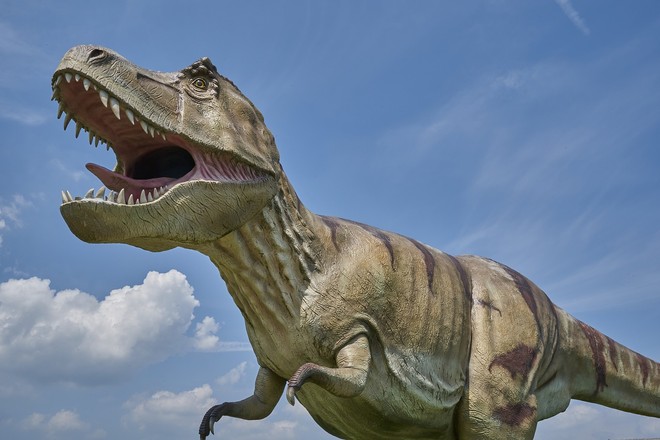 Having ascertained that the arms of the T-rex were visually short compared to the rest of the body, it is good to clarify if their minimal size could make them an effective weak point. We thus discover that in reality his limbs could only be considered tiny in relation to his total size, and that from a human point of view they would have been scary anyway. Spielberg’s famous film, Jurassic Parkhas given us a portrait universally considered very close to the possible real aspect of the T-rex, but the functionality of his arms have never been fully clarified and perhaps this has helped to stimulate the collective imagination in a negative sense.

We know that, on average, T-rexes measured around 12 meters from head to tail and could reach a weight of around 10 tons. His arms were about 1 meter long and some paleontologists believe they would have been able to develop a strength at least 3 times higher than that delivered by the arms of a very strong and trained man. If anyone had any doubts about their strengths, in a bench press challenge they would have smashed any athlete with no ifs and buts.

And what about the range of motion of their arms? Even on this point there is a lack of knowledge, but once again previous paleontological studies on the question come up to us. Their mobility was undoubtedly limited, according to some documents in fact, they could only oscillate by a maximum of 45 °, but thanks to the force described above, they could still be useful for squeezing the prey. It seems that the two big fingers (the third was underdeveloped) also intervened to assist them in the battle, with which their appendages were equipped, which ended with powerful claws as we will see in the next chapter.

So we come to a fundamental question, namely, how did the T-rexes use their little arms? The answer is less obvious than expected and some studies have been written on the subject, the results of which have not yet made everyone agree. We can therefore talk about several theories, some of which may be false but we cannot even exclude that they are all true. There are no certainties at the moment, so let’s see what are the most popular hypotheses on the subject.

WHAT WAS THEIR UTILITY? 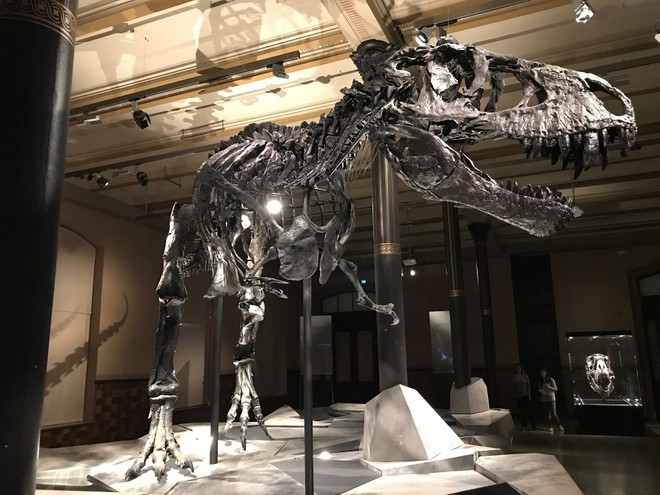 Let’s see below three of the hypotheses that are most taken into consideration to answer this question.

Despite public perception, according to Dr. Steven Stanley of the University of Hawaii, located in Manoa, the T-Rex’s stubby arms were actually among its most ruthless weapons during close-range attacks. The paleontologist argues that the T-rex could have used its arms to cling tightly to its prey as it writhed, before finishing it off with a killer bite thanks to its powerful jaws. This would also explain the muscular power that the two limbs were endowed with. According to the professor, the limbs would have been useless in evolutionary terms if they had not maintained some functionality.

It is also thought that too the long claws, which measured up to 10 cm according to the most popular toerie, they could have assisted the attack by inflicting deep wounds on the prey. According to the pelontologist, the creature’s ancestors most likely had even longer limbs. Also according to Stanley, perhaps once the arms could have assisted the dinosaur in posture but their evolutionary path could have led them to support the enormous weight of the upper body only on the legs, making this functionality of the upper limbs useless.

This is the theory with less foundation but which has been taken into consideration by some paleontologists for years. It is thought that the males of T. Rex mainly used their arms and hands to cling to the females during mating, nothing more; however we cannot even exclude that this was one of the many uses and not the exclusive one.

You don’t need to be a paleontologist to know that both males and females of T-rexes were endowed with the same limbs and therefore it is safe to believe that the female specimens used their arms in other ways. As mentioned right away, this hypothesis is among all the one that enjoys the least consensus among paleontologists, but it is one of the most suggestive and infinite source of derision on the web.

It might seem unlikely but it is among the conclusions that some studies have reached. The T-rex used its arms to lift itself off the ground when it happened to fall during a battle, however there is no direct detectable evidence from the available fossils that can confirm this possibility.

The hypothesis that it is one of the many uses for these limbs remains in vogue, but if we think about the weight of the T-rex and the hypothetical force delivered by the arms, this possibility is less credible and does not enjoy absolute consent among scholars.

WHY WERE THEY SO SHORT?

For some, T-rex arms are a vestigial structure – a part of the body that served a purpose far away in an animal’s family tree, but then gradually shrunk in size and function in response. adaptive to millions of years of evolutionary pressure.

Perhaps the best example of truly vestigial structures are the fossil remains of snakes with small five-toed feet, however biologists and paleontologists often describe a structure as “vestigial” simply because they have not yet identified its purpose.

Let’s think for example of the appendix, a classic example of a human organ that was considered vestigial until it was discovered to have a very important function for health, namely that of “restarting” the bacterial colonies in our intestine after they have been wiped out by a disease.

As with our appendages, something similar may have happened with the study of the arms of the Tyrannosaurus Rex. The most likely explanation for the T-rex’s strangely disproportionate arms is that they were exactly as big as they should have been. This fearsome dinosaur would have quickly become extinct had it not had arms, or because it would not have been able to mate and produce small T. rex, or perhaps it would not have been able to stand up if it had fallen to the ground, or perhaps because they represented the right defensive tool coupled with its bite. We’ll never know for sure, but recent research once again explores why these limbs would have been so disproportionate.

In this case, we are talking about a form of defense and this is stated by Kevin Padian, a biologist at the University of California, author of an interesting article that you find in the full version in SOURCE. According to the author, the tyrannosaurus would have developed short arms like evolutionary response to the need to reduce the risk of being accidentally bitten by other T-rexes during phases of food frenzy. Padian also noted that the predecessors of the tyrannosaurids featured longer arms, so in his view there must have been a reason why they were reduced in both size and joint mobility. This would have affected not only the classical T-rex that lived in North America at the end of the Cretaceous period, but also the African and South American abelisaurids of the Middle Cretaceous and the carcharodontosaurids, which ranged in Europe and Asia during the Early and Middle Cretaceous, and which were even larger than the tyrannosaurus.

The paleontologist is among those who maintain that some of the hypotheses of use mentioned above are actually not very credible. He would have come to this conclusion after having carried out measurements on a fossil specimen called MOR 555 and his conclusion was that all the uses described would have proved unsuitable for limbs that have reached this level of atrophy.

“The longer arms, especially in their natural orientation, a little extended forward, would have carried them within the deadliest jaws ever recorded on land. The danger of injury, amputation, infection, disease and ultimate death … would be was a selective reduction force, regardless of relict limb functionality. We hypothesize, therefore, that forelimb size reduction was a secondary function of selection for something else. As such, we should not seek functionality in these reduced limbs. , but how that reduction served a broader purpose. “

Notwithstanding that Padian’s is also a hypothesis, his point of view brings us back to the starting point and makes us understand once again that the explanation behind the “ridiculous” dimensions of the arms in the T-rex has not yet been found. . Will we ever have a certain answer? At the moment it is impossible to establish this but we will follow any future developments with curiosity.