The road has been long, with the very first clues dating back to the end of August 2021. But you know, come on Whatsapp the major innovations have important gestation times (did someone say multi-device?). In the end, though, the reactions to the messages have arrived, and this time really: it is no longer a test phase.

For the occasion, he even bothered Mark Zuckerberg (also engaged in these days on an Italian tour), that broke the news with a post on Facebook. The content is crystal clear: reactions to messages arrive on WhatsApp starting today.

In short, it is no longer an exclusive function of the beta channel, where we have already seen and examined it extensively in recent months, but a novelty that finally arrives on the stable channel.

If you are rushing to WhatsApp to try it, however, beware: the distribution starts today, yes, but it will be gradual. And at the moment, Meta has not received any indications on the areas that will be involved first and the timing necessary for global coverage. However, it shouldn’t take long before everyone can really benefit from the new feature: a matter of hours or a few days, probably.

REACTIONS TO MESSAGES: USING THEM IS SIMPLE

For those who don’t know, the reactions in question are emojis that can be affixed to messages: a quick way to “reply without replying”, that is, without blocking the flow of a chat, for example. The operation is the same that, remaining within the Meta products, it has been possible for some time to experiment with Facebook Messenger: to react to a message just hold down on it for a long time to make a horizontal element appear on the screen that will allow you to choose one of the emojis available. 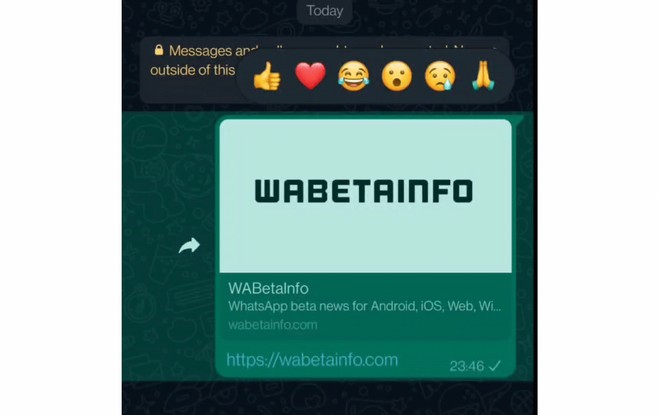 By the way: as widely anticipated, there are six reactions availablenamely the thumb of the like, the heart, the face that laughs to tears, the amazed one, the crying one and finally the two hands joined as a sign of thanks or prayer.

But Zuckerberg confirmed what had already emerged in recent weeks, namely that more reactions will come in the future: probably, again on the basis of what we saw on Facebook Messenger, it will be possible to draw on the whole emoji catalog.