In the continuous search for originality, Vivo has achieved the new V23 which, like the rest of the series, focuses a lot on the ability to acquire images and videos from the front camera, indeed, here we should speak in the plural given the equipment. But to get noticed, the Chinese manufacturer has also put something else on the plate, with a certainly recognizable design and materials of excellent workmanship.

If we look only at the challenge of identity research, well then the V23 wins hands down; Unfortunately for Vivo it is not enough just to “get noticed” and the public’s favor is obtained by hitting the mark in many other areas, for example by mounting a fantastic display like this Amoled. I’ve tried it in the last week, in multiple conditions, and today it’s time to tell you what it’s made of. 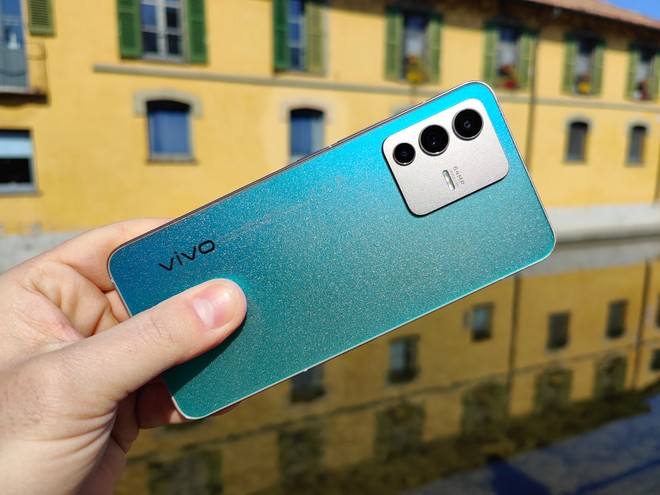 Perhaps we will have to get used to it, on the other hand the simple colors seem to have been outdated and even Vivo has focused on a photochromic glass back cover that goes from the basic Sunshine Gold to an emerald green under sunlight. To “activate” this process the ultraviolet light, 30 seconds are enough for a complete transition and in a short time everything goes back to the starting state, a nice chameleon found that we had already seen in other shores (on Realme 9 Pro Plus).

In this case the yield is certainly better, on the other hand the materials are more sought after and the care is very different – as indeed also the positioning of the device – but one thing is unchanged: the detachment from the rear cameras module. Once the color has changed, in fact, there is an all too evident chromatic discontinuity that is certainly not fantastic.

Metal shell and flat edges that make it look more chubby than it is, the V23 is indeed very slim with its 7.55 millimeters and also the low weight of 181 grams it plays in its favor. In my hand, the feedback is very good, not only for the materials used but also for the format and overall dimensions; we are in fact talking about a smaller smartphone than the average with its 6.44 inches. 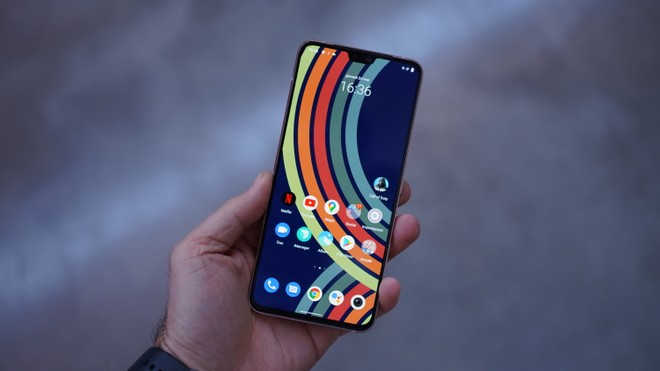 What you don’t expect is right in front of you: the Amoled HDR10 + panel is in fact one of the brightest and clearest in the category, boasts an excellent oleophobic treatment and maximum readability even under sunlight, almost comparable to that of some top of the range. I don’t want to exaggerate but this is the impression I got right from the start, both indoors and outdoors, especially in the latter context where many competitors get lost in a thousand reflections too many.

6.44 inch diagonal which makes it a “medium size”, smaller than the standard and capable of improving grip and ergonomics. The format in 20: 9 then makes it fairly narrow (72.4 mm). The resolution is the classic Full HD + (2400 x 1080 pixels) and the maximum refresh rate can be set up to 90Hz, the right compromise between speed and consumption in my opinion.

HOW IS IT GOING 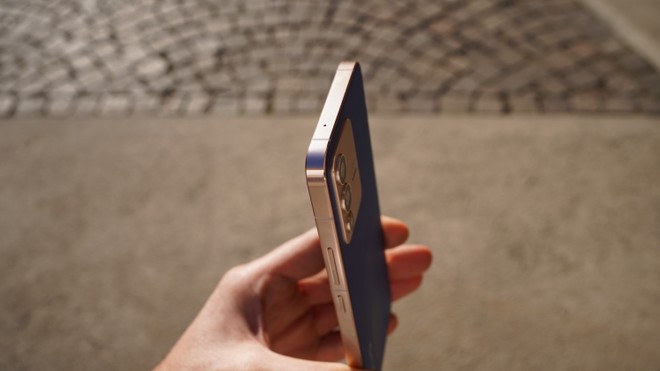 Given the positioning and all that Vivo then put into this V23, I would have expected something more than the MediaTek Dimensity 920 chip, an adequate motor for many mid-range that here however meets some small limitations. Nothing transcendental, mind you, but I noticed some small lag in navigation, in the passage from one app to another and in the moments of maximum load. Maybe some software refinements and the next updates will be enough to file these small things, for the rest it seems to turn quickly and manage the whole sector properly.

I have played without problems with many of the classic titles that stress smartphones, high details and display that does its part given the qualities already described. Playing is a pleasure, limited only by mono audio: the only speaker is in fact placed at the bottom, it sounds good but certainly cannot reach the capabilities of a more complex system.

Complete connectivity that includes support for 5G networks, bluetooth 5.2 and dual band WiFi ac, so little to complain about and dualSIM slot that allows you to use two simultaneously without particular repercussions on autonomy or temperatures. Here, the latter are kept at bay even in the game or recharge phase, I would say that it is a “fresh” device that certainly does not fear the summer. 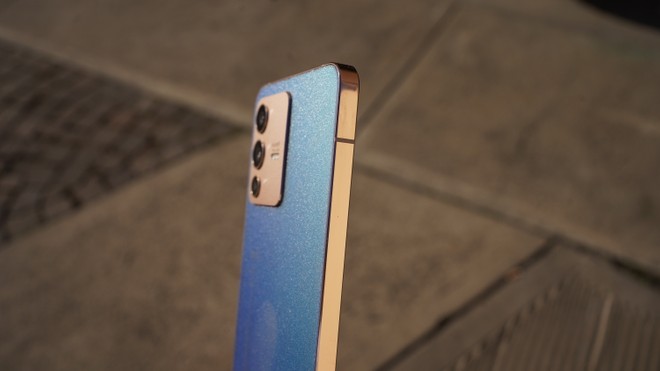 Let’s start with the real protagonist of this sector, the main front camera. For the occasion, Vivo worked on a JNV ISOCELL 3.0 image sensor (customized) from 50MP with AF medium size, that is 1 / 2.76 “, enough if we consider that it is a” front “. The results are first of the class, to give an idea of ​​the level we have also made a quick comparison with the” king of selfies ” Galaxy S22 Ultra (40MP) and distinguishing photos is almost impossible.

Focus that works very well in the recognition of the eye, well reproduced colors and many details. The limit lies in the videos that suffer from a lack of optical stabilization that is noticeable in motion, although there is the software option that stabilizes a bit by making a decisive crop of the image. Little to say instead about the front wide-angle, a very wide and standard 8MP, which drastically drops in detail compared to the sister who is next to it.

If we move instead to the back it is the 64MP camera that is the protagonist, it is of good quality and manages to come up with shots of a certain level even when it is pushed to 2x digitally. I was also positively surprised by the focus, which is precise even in the face of smaller and usually complex elements to shoot.

Definitely less exciting is the wide-angle, a classic 8MP that we have already seen over and over again and does its job well enough but goes into crisis quickly and does not boast particular clarity.

Slim body and low weight, so no one expects a particularly large battery, Vivo was in fact conservative and integrated a 4,200mAh unit which I still found adequate to support the daily work load. However, if you stress more than necessary, on those particular days when you have special needs, you could arrive at dinner time “in fixed red”.

To give us a hand, in all cases, the charger included in the 44W package which manages to recharge it from off to 100% in just under an hour (58 minutes to be precise). It is not the best, even on this front something more could have been done, especially given the competition that even on the midrange now pushes with adapters from 65-66W. Here are the partials (from off): 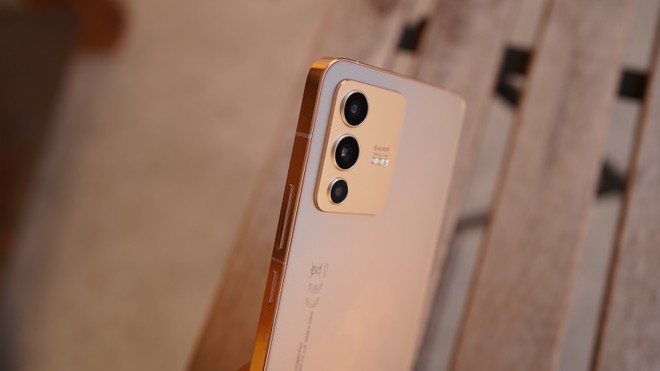 Lights and shadows for this Vivo V23 which raises its head compared to its predecessor and shows particular attention to certain aspects, aesthetic and functional, certainly differentiating itself from the competition. The question is whether these strengths are enough to justify a high expense for a mid-range: the price list speaks of € 549 for the 12 / 256GB variant which I also have on trial (in Italy, where it will arrive at the end of the month, that base with 8 / 128GB does not seem to be foreseen).

Personally I would have seen it better with about 100 euros less, which will probably happen naturally with the devaluation that we know involves almost all Android devices even in the first months of life. I certainly did not expect perfection, of course, even the much more expensive models cannot aspire to that, but positioning above five hundred euros now means having certain cards in order: stereo audio and zero lag, just to mention the two things. main.

Vivo has a remarkable firepower in Asia, it is in fact one of the most popular brands thanks to a very complete and varied line-up. In Europe and in Italy, politics is different and focuses on a few but good horses, and the Chinese house will have to aim very well to emerge and demonstrate that it keeps up with all the others, without forgetting to put original solutions on the plate to which we he got used to in these first two years in Italy.