The ones you see in the opening image are the oldest pants in the world (at least among those found so far): they were discovered in an ancient Chinese cemetery already a few years ago, and in 2014 carbon dating established that they date back to a variable period between the thirteenth and tenth centuries BC, and therefore have approximately 3,000-3,300 years of age. The fact that they remained intact, however in relatively good condition, for so long, is an extraordinary detail, but with the help of an expert weaver it emerged that they are also a constructive marvel, especially for the time.

The trousers probably belonged to an elite warrior, judging by the rest of the objects found in the tomb. In addition to the wool trousers, the so-called “Turfan Man” (from the geographical area where he comes from) wore a poncho tight at the waist, ankle-high boots and a wool headband decorated with bronze discs and shells. Then there were bridles, a bit and a battle ax, which suggests that man has spent a lifetime fighting, mostly riding a horse. 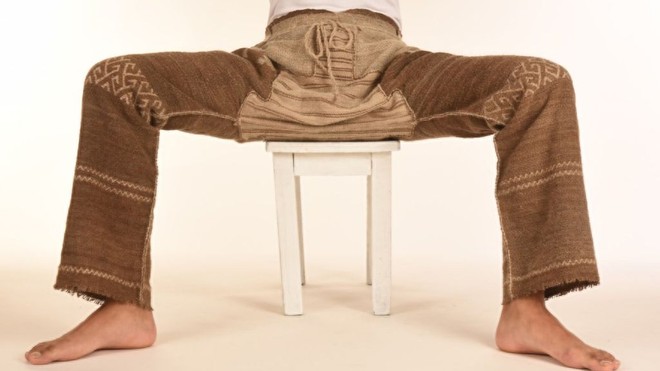 Today we take this type of garment for granted, but at the time it was something of a technological revolution: warriors on horseback needed a leg cover that was flexible enough to allow you to move (and attach, if necessary) freely and without the fabric tore; at the same time, it needed as much reinforcement as possible in the weak points, for example the knees. The solution developed by the weavers of the trousers in question was incorporate different techniques, four in total (three for weaving and one for weaving the thread for seams) in a single product.

For most of the trousers Chinese weavers used weave (in the textile industry, weave is the way warp threads intertwine with weft threads) to twill, some variants of which are still extremely popular today for the packaging of multiple fabrics, including denim, tweed, moleskin and tartan. The first traces of use of twill weave go back as far as 300 years before their appearance in the pants of the Turfan Man. This weave is known to be very durable but also reasonably flexible (think jeans) – a good middle ground. for the base of the trousers; among other things, the weavers have provided a larger horse to ensure maximum freedom of movement. 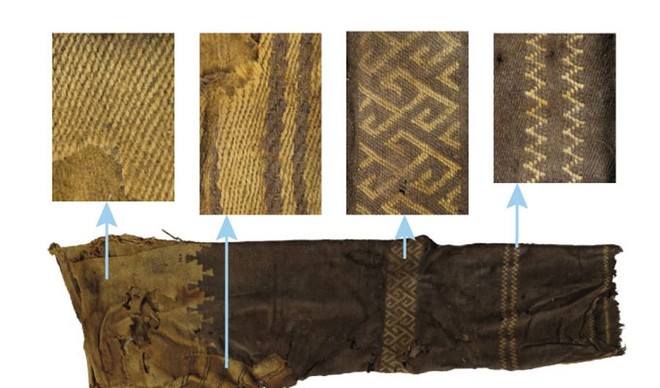 However, another technique was used at the knees, that of the tapestry generally used in carpets, much more resistant but also more rigid. In addition, at the waist, a third technique was used to make a rather thick elastic that would help the trousers to remain firm in position. In the middle of the shin, probably at the end of the boots, there is an additional decorative zigzag motif. Finally, the most surprising detail: the trousers are woven as a single piece. There are no obvious signs of seams between one piece and another.

The multitude of techniques suggests that the Turfan Man civilization came into contact with a considerable number of different cultures, even very distant ones. It is currently believed that the tapestry technique originated in South-West Asia, while that of the twill comes from North-West Asia. The shape of the decorations on the knee and ankles resembles that of the ziggurats, which leads researchers to speculate interactions even with the peoples of Mesopotamia. Regions that are thousands of km away from each other, and that suggest a nomadic population, who earned his living by moving herds of cattle between the Eurasian steppes. Apparently the Yanghai region, where the cemetery was found, was a key hub for these populations. 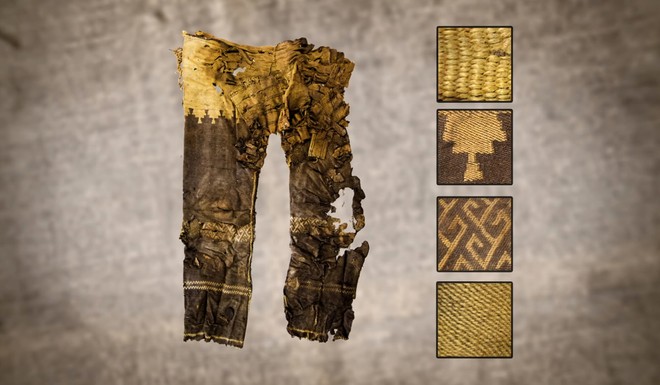 Several scientific studies on the “oldest pants in the world” have been published in recent years: the latest dates back to just a few days ago and was published in volume 29 of Archaeological Research in Asia. It was curated by Professor Mayke Wagner and her team at the DAI, or the Germanic Archaeological Institute, is available for download, for a fee, on Science Direct (link in SOURCE). The research itself anticipates that it will not be the last: in particular we will have to try to better reconstruct the movements of the Turfan Man population and verify the possible connections with other civilizations.