If the Earth at this time still appears to be a hospitable place for man (despite man …) in many areas of its surface, we know that in the course of its history and of the different eras the changes have been really intense at the level geological and this also reflected on the fate of the life forms that inhabited it.

Alone in the last 260 million years the changes have been radical and among the major events we cannot forget the extinction of the dinosaurs, the formation of the continents as we know them today, and many other geological events that until now we have considered random and part of an evolving planet.

Yet not everyone agrees and recent research has worked to find a temporal logic in these geological events, often destructive, arriving at a solution that is incredible. It appears that the Earth has a very precise cadence for some epochal changes, a kind of geological beat that some believe they have measured.

This is the theory carried forward by a study started in 2018 by two researchers from the University of Sydney and taken up by a team from New York University in 2021, which then continued throughout the year. As stated by lead author, Michael Rampino, the conclusion they arrived at is quite simple but without explanation. Our planet has a particular geological activity whose cadence resembles that of a heartbeat, and which in fact leads to upheavals of the planet approximately every 27.5 million years.

There is talk of events of the most varied such as volcanic activities, mass extinctions, reorganization of plates and sea level rise.

This was stated by Michael Rampino in a statement of 2021, strengthened by an analysis carried out by his team on the age of 89 well known geological events of the last 260 million years. The team also created a graphic that highlights the disturbing timeline of cataclysmic events. 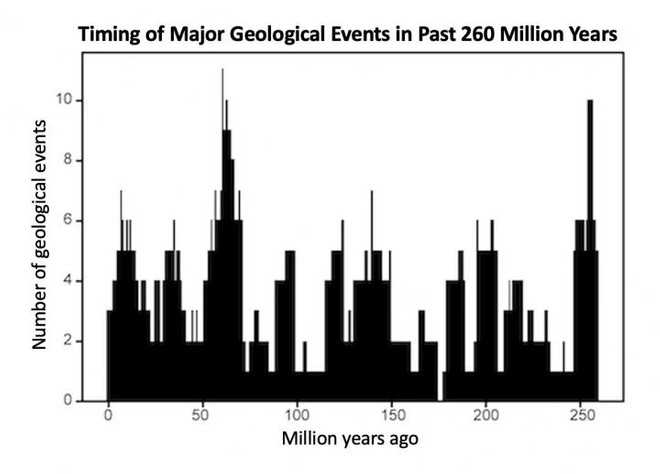 But this is not an unpublished study and similar theories have been in vogue for almost a century now.

In the 1920s and 1930s, scientists at the time had suggested that the geological record had a 30 million year cycle, while in the 1980s and 1990s, researchers better analyzed the sequence of older geological events to arrive at a more accurate result that speaks of an interval between 26.2 and 30.6 million years. Now apparently the square would have been found and the cadence of 27.5 million years between one event and another seems the most realistic.

This is a clarity that has no apparent explanation, even if, as mentioned above, the researchers are convinced that it is not accidental.

These cyclical impulses of tectonics and climate change may be the result of geophysical processes related to the dynamics of the mantle’s plate and plume tectonics, or they could alternatively be stimulated by astronomical cycles associated with the movements of the Earth in the Solar System and the Galaxy.

This is the opinion of the team, which apparently will continue in the search for answers to this cyclicality. At this point a question should spontaneously arise in our readers: where are we in the 27.5 million year cycle? We reassure you immediately, apparently there are about 20 million years to go until the next cataclysmic event! We can sleep peacefully