Skoda Enyaq Coupé iV is proof that even in the electric car market there is room for more versions and less massive niches. In reality, looking at things from a greater distance, it is the world of SUVs that guarantees manufacturers excellent returns and the possibility of wandering with body variants: the latest fashion is that of Coupé SUVs, and everyone wants them. To the point that they also begin to invade the mass market with models such as Renault Arkana which represent the alternative from department stores to the various GLCs and the like which, in the metaphor, we identify as atelier.

Being a variant with some aesthetic novelties, trim adjustments and a new engine, the test to refer to for the characteristics in common is that of the Enyaq iV: 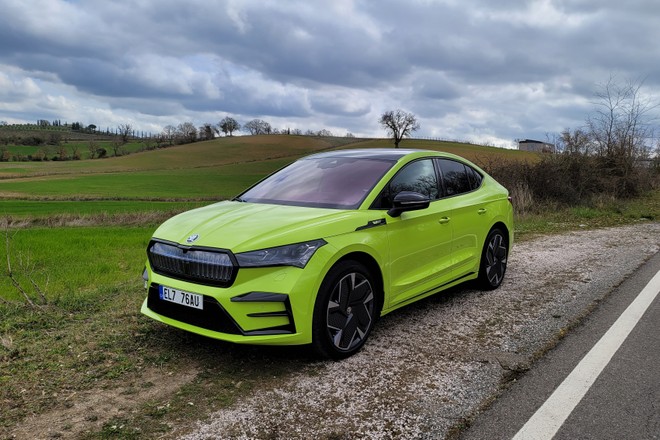 The aesthetic is what immediately catches the eye: Enyaq Coupé iV is more inclined to dress as the market likes, in a more sporty and aggressive way. You don’t necessarily have to look at the RS Coupé iV, she is undoubtedly charming, but just turn to any engine of this variant with the sloping rear to find the panoramic glass roof is standard.

This is a first in the Skoda house, and it is clear that it is put there for challenge immediately and with Tesla aggression Model Y. 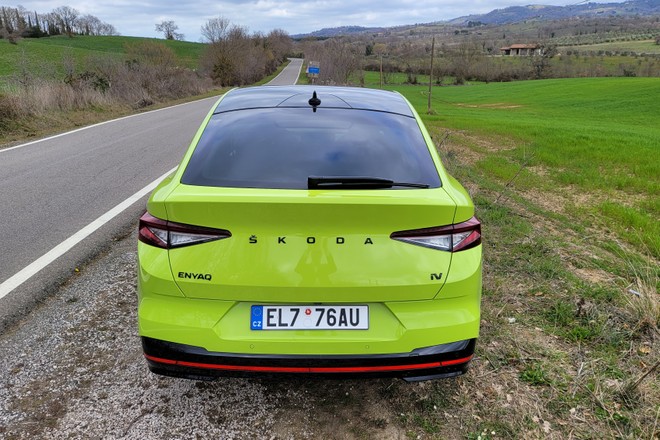 Sitting in the back with the sky fully visible is a worthwhile experience. We can consider it a useless accessory, it is true, but each route will gain something in terms of travel experience.

Skoda 1: Tesla 0, Why? Simple, with the same magnificence of the glass surface, Skoda he applied his Simply Clever philosophy to this detail as well and, under the hat rack, there is a foldable awning that allows you to darken it on the sunniest days. It won’t be as glamorous as the electrochromic one on the BMW iX, but it works, and unlike the Americans (who have a better integrated glass surface), the Czechs have experience of these details on their side.

We find the other positive aspect by looking at what does not change: the trunk loses a few points, it is true, but you will have it anyway 570 liters available and a practical and rational space. Promoted. 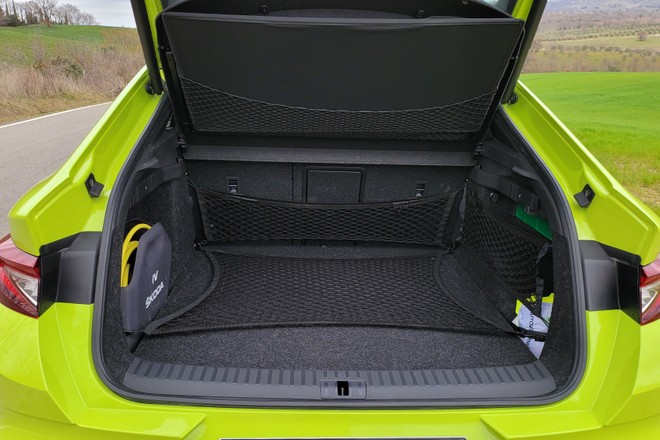 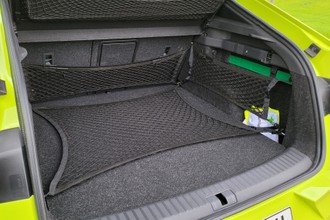 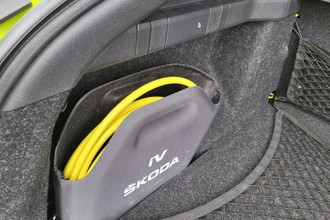 Other aspects are also noteworthy: the Cx improves, more aerodynamic care to reach a result of 0.234. Up front, the Crystal Face is standard on the RS Coupé iV and its 131 LEDs that illuminate the front make you indistinguishable at night.

You can have it as an option on the other engines, but at that point it is better to divert the money to the Full LED Matrix which have an undoubted usefulness and demonstrated by the many who have chosen and used them for some time. 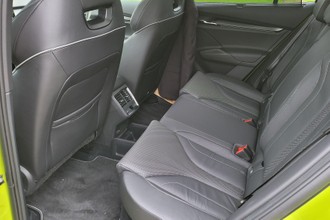 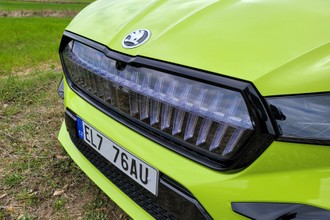 Then also to be promoted the habitability of the rearwhere the Coupé cut is not one that steals too much space in height, and the aesthetic details such as the matching side skirts and the new bumper that lighten a lot of SUV dimensions and bulk.

The specific suspension also contributes to this, which lowers the car by 15 mm at the front and 10 mm at the rear, and has evident effects also in the driving dynamics.

HOW IS IT GOING? ROAD TEST 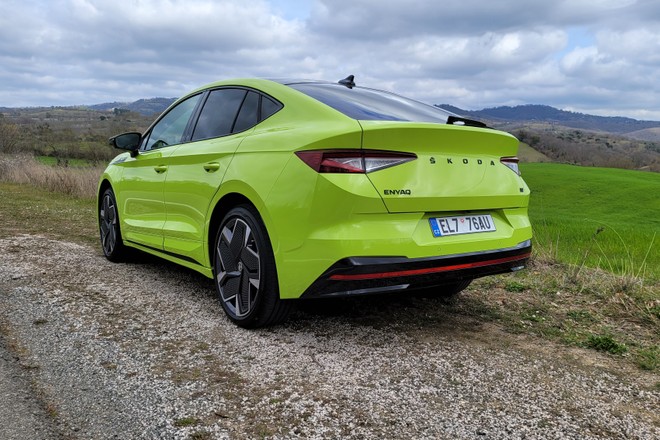 It always remains an SUV, it is more traditional than the Model Y chassis with its aluminum mold from a unique casting that gives excellent rigidity, it still weighs a lot, but the lowered suspension makes the difference compared to the non-Coupé model.

You notice it above all behind the wheel of the RS Coupé iV for one simple reason: the 299 HP engine pushes you to go fast and put the mechanics to the test even in the corners. 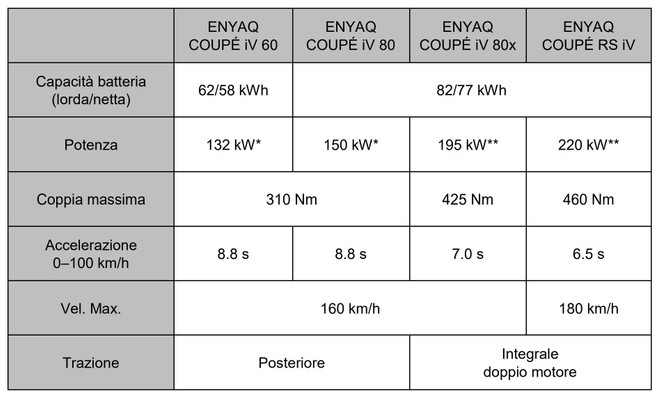 You don’t necessarily have to choose the RS to live happily: it’s a whim, but to have an all-round car advice is to save and focus on the Enyaq Coupé iV 80x because you already have the increased battery (from 77 kWh net), the four-wheel drive and the double engine.

Those who do not need all-wheel drive have access to it iV 60 and iV 80. Both perform very well, the engine is sized for the size of the car, accelerates in honest 8.8 seconds (for both) with 310 Nm of instant torque, to tackle even the most extreme slopes. It’s almost nine seconds, but who said that electric cars all have to be supercars? If the torque is instant and right, even 9 seconds is fine in everyday driving. 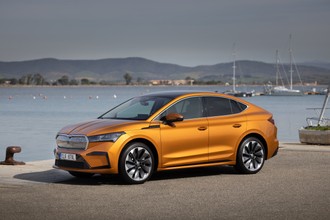 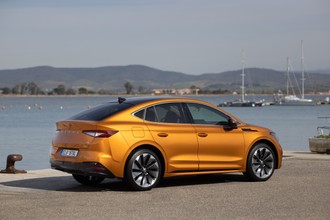 Regardless of the engine, the new lowered stance has its effect in limiting body roll, but in general there is no lack of stability. Today cars of this kind are difficult to undermine traditional driving because they have a low center of gravity and ubiquitous electronics. Of course, an emergency situation can occur, one where there may be a criticality due to the masses at stake which increase inertia.

The classic emergency dodge, very fast right left, is handled more easily here on the Coupé thanks to the lowered suspension. The oversteering behavior is then mitigated by the four-wheel drive which is able to work more easily in maneuver correction with the electronic controls.

The DCC with the adaptive damping system is optional, but the lowered suspension with stiffened suspension and progressive steering are standard on the Sportline set-up of all engines and on the RS.

The Coupé version of Skoda’s electric SUV will not go down in history as the best performing one, but it doesn’t want to be. Its great value is the relationship between dynamic performance, limited roll and the ability to always ensure the right comfort. Compared to the Model 3 from which I had just gotten off after a journey of 400 kilometers, which is more rigid in absorption, the Enyaq Coupé RS iV has always proved to be soft in dealing with gruyere roads and more or less marked potholes.

A whole other journey in terms of softness, obviously losing “kart effect” points. The beauty of being able to choose the travel experience that you prefer or that you need (for example for passengers).

ON THE RIGHT TRACK… 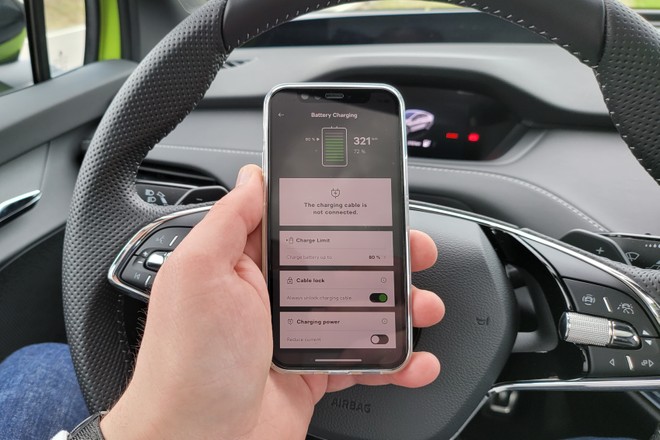 Top up? First of all there is the new software, the ME3 which has allowed to increase the power on the Coupé and which will also arrive for the Enyaq SUV. This is a mammoth updatelines of code that significantly improve charging and battery management, especially in the way its temperature is controlled.

It works, the car consumes less, recharges faster: the peak is 135 kW in DC for the 82 kWh gross battery, 120 kW for the 60 iV with the 58 kWh gross version. At home there is the usual 2.3 kW charger or with Wallbox and columns you get to 11 kW in AC. Unique card and offers for wallboxes are the same as for traditional Enyaq, you can find them here. 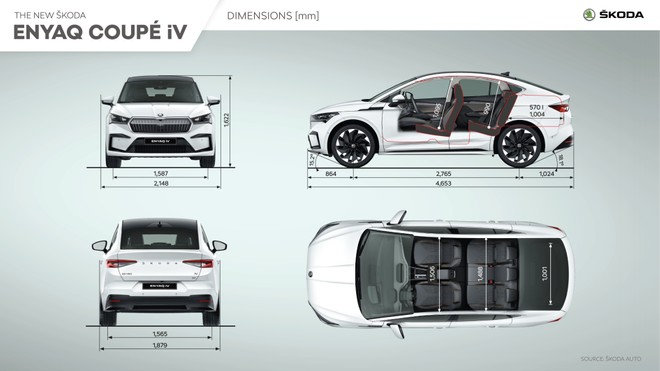 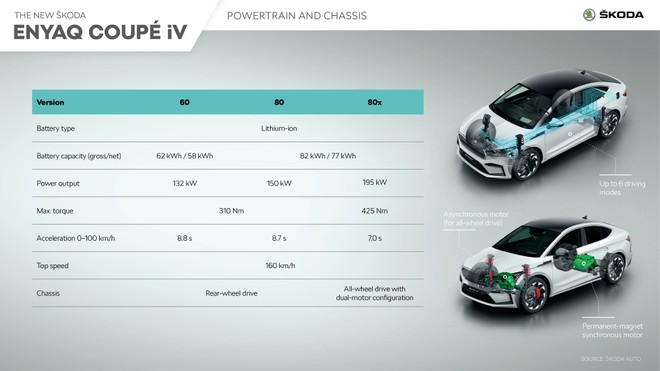 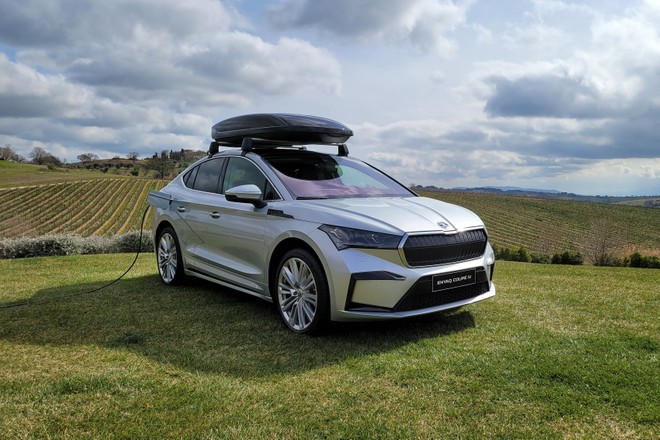 It must be said immediately that the availability of Skoda Enyaq Coupe iV is expected between end of summer 2022 and the beginning of autumn, so there will be a few months to wait. 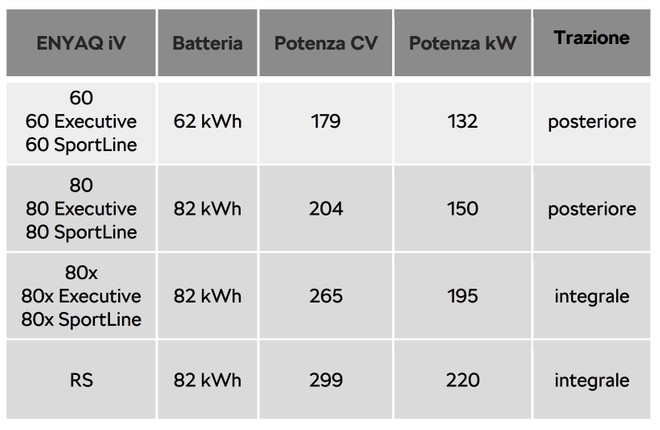