The arrival last year of the Perseverance rover on Mars provided scientists working on Earth with various opportunities for study and among these, the one concerning the characteristics of sound and its propagation. The red planet has a considerably different environment from the terrestrial one and if on a theoretical level we knew it very well, the arrival of the first recordings provided a confirmation that gave the “the” to further investigations.

One of the most interesting aspects of the Perseverance rover’s instrumentation is the presence of two microphones capable of picking up and recording ambient sounds. For those who do not remember, the first environmental sample was recorded on arrival on the red planet (remember the 7 minutes of terror?), While the other, the most used currently, is part of the scientific instrument SuperCam and has already returned the first audio sample of his laser and some ambient noises.

Other audio captures followed and numerous recordings that allowed an international team of scientists to carry out the first in-depth study of the characteristics of sound in an environment such as the Martian one.

CHARACTERISTICS OF THE MARTIAN SOUND 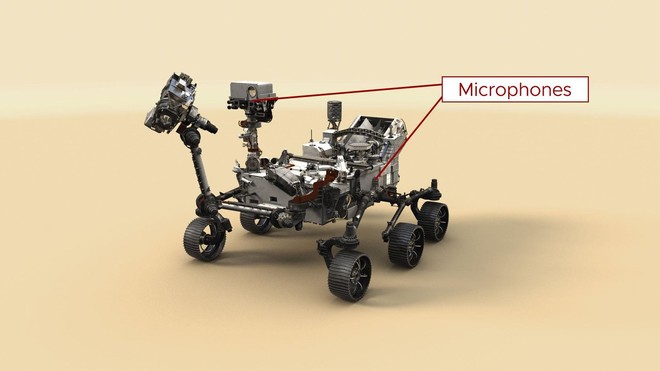 The results are exciting and in addition to better detailing the behavior of sound waves in a more rarefied atmosphere than Earth’s, they lead to the conclusion that audio recordings could also be used to detect changes in atmospheric pressure, or even provide a better assessment of the health status of the rover.

The study concludes that the subtle atmosphere composed mainly of carbon dioxide makes the planet very silent. Another effect of the atmospheric composition is the low speed of propagation of sound waves, which apparently also varies depending on the tonality. On Earth, sound typically travels at 343 m / s, with no radical or perceptible distinctions in pitch. On Mars, the lowest sounds travel at around 240 m / s, while the highest ones travel at around 250 m / s.

Another consequence of the thin Martian atmosphere is the distance that can be reached from the sounds, much smaller than what happens on Earth, and also in this case linked to the tonality and consequently to the frequency. Research confirms that the higher sounds are those less able to propagate: to give an example, a high-pitched sound that on Earth is perceptible at a distance of 65 meters (for example above 2,000 Hz), on Mars is completely dispersed in only about 8 meters. It is therefore a value, that of the distance, which decreases as the frequency increases.

WHAT OUR EARS WOULD FEEL ON MARS

Now that we have established the characteristics of the sound, we can then try to imagine what our ears would hear if we could be on Mars alongside the Perseverance rover. The most exciting aspect for many may be the predominance of silence. Mars is mostly a quiet place where the different speeds with which the sound frequencies propagate making the sound darker and muffled. A little help in better understanding what is described is offered by the NASA registration above, in which we find sound samples of various types and recorded during the first 216 days.

To further help us in this understanding was also the Ingenuity helicopter (present in the recording), whose sound of the moving blades was recorded by the microphone of the SuperCam, which mainly picked up a sound frequency at 84 Hz (very low in essence) when the helicopter blades were spinning at 2,500 rpm. The study of the loudest sounds, on the other hand, was carried out thanks to the laser noise of the SuperCam, whose frequency is around 2,000 Hz.

A final aspect to take into consideration is the change in atmospheric pressure with the changing seasons, which as we have seen above, incredibly influences the Martian sound experience. Translated into simple terms we can say that as pressure increases, that is as the autumn months approach, Mars gets louder, only to return slightly quieter in winter and spring. The team of scientists therefore believes that, if we are to use sound to better study the climate and geology of Mars, the months ahead could be the most productive.

All the results of this very interesting research were published on April 1 in Nature (in SOURCE), but this is only the beginning of an in-depth study that will lead to even more detailed results.