A few weeks ago we talked about the incredible journey that the Perseverance rover and the Ingenuity helicopter made to get to the vicinity of the remains of the ancient river delta and now that the longest part of the journey has been completed, a new mission begins. whose complexity is absolutely not to be underestimated. There are various risks that NASA instruments will face and for the first time the two NASA vehicles find themselves having to carry out rather complex assessments on the path to take.

If on the one hand we have Perseverance, the main vehicle of the mission whose movement capacity is limited by the surrounding terrain, on the other there is Ingenuity, that is the small helicopter that has proven to be able to fly easily over any type of terrain, being able to trust almost blindly with its TRN navigation system (the same one that allowed the landing on Mars over 1 year ago) that NASA has equipped it with. Let’s find out in this special what is the current situation on the red planet and what prospects await us in the coming months.

PERSEVERANCE LOOKS FOR A WAY TO GET CLOSER TO THE DELTA 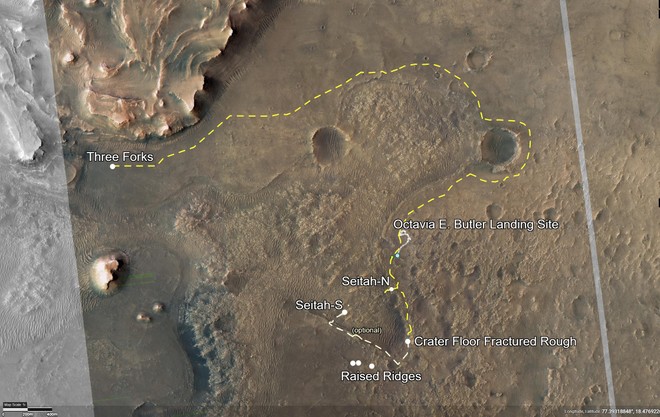 The ancient river delta has been defined as a sort of ‘party place’ for geology, and despite the questionable name (forgive us …) its features could actually be very interesting and reveal details about the history of Mars to date. unknown. But not all that glitters is gold and now that Perseverance is in the vicinity of the ancient sediments and has had the opportunity to observe them from a distance, new problems are presenting themselves to be addressed.

The path is particularly fraught with challenges and considering that the main objective is to carry out coring and take some samples, it will be necessary to considerably approach the most attractive areas from a scientific point of view.

For a few days now, the NASA rover has been in the area immediately beyond Three Forks, that is the location whose visit was planned since its arrival on Mars last year, and which, as we knew well in advance, would have been a real unknown for the continuation of the exploration. The updated mapping on the Perseverance position confirms this and despite referring to the previous 24 hours, it shows the rover in the same area for a few days, a sign that the surrounding area is being explored in search of the best way to move.

As you can see, at a certain distance but definitely further back is the Ingenuity helicopter, to which of course we want to dedicate a separate chapter further down. Perseverance data suggests that the delta deposits rise up to about 40 meters above the crater floor and at present the team responsible for evaluating the data collected by the rover is mainly choosing between two route options to tackle.

The most popular idea involves the passage through a region nicknamed “Hawksbill Gap”, particularly attractive as it could allow you to reach the heart of the river delta in less time. There is also a second option currently held as a reserve, or perhaps as a subsequent choice in chronological order, which involves passing through the area called “Cape Nukshak”. The latter could lengthen the timing but the first surveys seem to identify it as the safest travel area to be tackled by a land vehicle. As we have said several times, you cannot run the risk of covering up the rover or blocking it in the middle of the Martian rocks, so every move must be evaluated with great attention.

The rover will spend a lot of time in this area (about 6 months according to forecasts) with the aim of collecting other samples in addition to the eight already stored inside. This second campaign has been baptized with the name of Delta Front and will accompany us at least until next October. In this phase we will go up the delta along one of the two aforementioned routes, and then explore the area at the base, but in general most of the time will be spent in the transition region called “Cannery Passage”, which is positioned between the bottom of the crater and the highest areas of the delta. 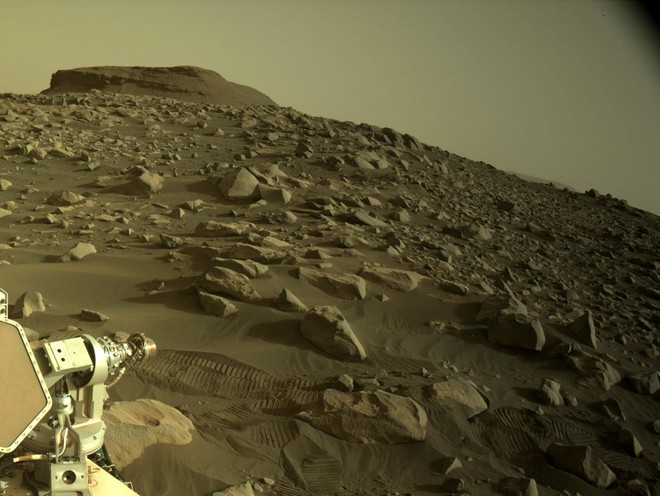 The plan provides that Perseverance will subsequently climb to the top of the delta again, perhaps choosing the reserve option to try a region not traveled before, and then spend another six months studying the higher portion thanks to the subsequent scientific campaign identified as “Delta Top “, the third since its arrival on Mars. In this phase, the rover will travel through the layers of the delta at different altitudes, stopping to analyze the sediments and collect samples along the way. But there is still time to talk about this phase as it is likely to develop between the end of 2022 and the first months of 2023.

The second Delta Front campaign is currently underway and in the coming months the entire suite of Perseverance tools will be used to find out more about the genesis of the river delta. The team in charge of the mission expects to find rocks quite different from the igneous rocks that characterize the crater floor, and of course during the exploration the most interesting and promising rocks will be targeted for coring, analysis and eventual collection. .

INGENUITY FOLLOWS FROM A DISTANCE AND COMPLETES 27 FLIGHTS

Ingenuity continues to remotely follow the operations carried out by the Perseverance rover, but just recently we shared the incredible photographs it managed to take during flight number 26, the penultimate in chronological order.

While moving north-west, the helicopter came across the remains of the old parachute and the heat shield, the two fundamental components that on February 18, 2021 allowed Perseverance to land on Mars, with Ingenuity hidden and protected under its belly. of the rover. For those who missed these incredible shots, we propose you to follow the link to the news written just a few days ago.

But the small Martian helicopter did not stop and a few days later flew again, completing flight number 27. In this phase it moved further west, while maintaining a considerable distance from the Perseverance rover which, judging by what is indicated by the map in real time, is just over a kilometer.

For a land vehicle it would be a difficult distance to bridge in a short time (Perseverance would take at least a week), but for Ingenuity the approach could reach a maximum of 2-3 flight segments, if we consider that the record displacement allowed the means of covering 704 meters in a single flight on route number 25.

The latest air movement allowed the helicopter to travel 307 linear meters at a maximum height of 10 meters above ground level. In this case the journey was undertaken at a slower speed than the previous one, at only 3 meters per second, which allowed him to cover the distance in about 153 seconds passing from Airfield R to Airfileld S.

If there is greater clarity on the plans of Perseverance, the next moves of Ingenuity are less clear and we will have to wait each time for the news shared by the space agency to know what the next steps will be. However, NASA has made it clear that Ingenuity’s role during the second scientific campaign will be that of reconnaissance and that its aerial analysis skills will be fundamental in deciding which direction to take the rover, as well as assessing the conditions of the ground. The area to be explored is inaccessible and with previous means we would not have gone as far as this, but fortunately what seemed an experimental technology useful for the development of more advanced drones has proved capable of withstanding over a year, surpassing every more rosy expectation. We just have to wait for further developments on the new scientific campaign, which is proving to be particularly exciting both for fans of the aerospace segment and for professionals.