As we have anticipated with some special and various articles previously written, the two most recent NASA vehicles sent to Mars, namely the Perseverance rover and the Ingenuity helicopter, have entered a particularly important phase of the scientific mission and, we do not hide it from you. , incredibly exciting for all those who have meticulously followed each goal achieved in the past year.

The new scientific phase, the second after the test carried out in 2021, is about to come to life and will have the important task of closely analyzing the remains from the ancient river delta that have been identified in advance within the Jezero crater. A little less than a month ago we told you about the beginning of this arduous journey that the two NASA vehicles were preparing to face, but the time has come to better evaluate the progress and the path taken. We thus discover that the two means have managed to obtain unthinkable results, indeed, considered almost impossible only a few months ago.

It has been a “record-breaking” journey for various reasons, even if speaking of it in the past tense is not exactly correct as it is still in progress. But much of the journey has been covered and, judging by the most recent images, the innermost part of the ancient sedimentary area is now within reach of the rover. A short distance away is the Ingenuity “reconnaissance” helicopter, but we will talk about this more in a dedicated chapter at the end.

Here is a detail of the current position of the two vehicles in the map updated almost daily, shared by NASA and available to anyone. The map is interactive, so you can zoom in or out to enjoy better detail. At the time of writing, the position is relative to sol 409, that is to the day of April 15, 2022, but it will continue to update as the two vehicles move on the Martian surface.

After the first year of exploring the area further south than the initial arrival point, the Octavia E. Butlee, the Perseverance rover has recently retraced most of its steps to return to the starting point and then head north-west. (with respect to the starting point on the map). Now that they are entering what we could define as a “hot zone”, it remains to be understood which path will be taken and how far it will be possible to push inside the delta.

We see very clearly that Ingenuity is currently just chasing the rover at a safe distance, but as we will see later its role may soon change.

We had anticipated it in the previous special and what was written has now materialized. The path started from the area nicknamed Octavia E. Butler took the Perseverance rover to travel nearly 5km and according to the latest updates from NASA, everything went smoothly. Not only that, once again two new records have been broken and concern two particularly important aspects: the first is the ability of a terrestrial vehicle to move on Mars, while the second is represented by the total distance traveled. For the first time a land rover was able to move for 520 meters in just 3 consecutive days of travel.

We must not forget that numbers of this kind must be contextualized, and if the Martian helicopter is able to cover 520 meters in just over 2 minutes, Perseverance takes about 1 hour in favorable conditions and at maximum speed (about 4.2 centimeters per according to). But don’t be fooled, numbers like those mentioned above may seem like something small, but they are actually very respectable targets in an environment like the Martian one!

To make all this possible was without a doubt the autonomous navigation software, without which the whole operation would have been much slower and more closely linked to human intervention. In reality, the planning of the trip was done from Earth by the team of technicians involved in the control of the rover. Using special 3D glasses, the rover’s drivers planned specific routes and stops, but every intermediate decision was left to artificial intelligence. Perseverance’s automatic navigation system, known as AutoNav, is able to create 3D maps of the terrain in front of it, identify any dangers and plan an alternative route to avoid impassable areas, all without further guidance from the controllers operating on Earth. Autonav closely resembles the autonomous navigation systems fitted to newer cars.

At present Perseverance is advancing by keeping the sediment zone to its right and very soon the search for an ideal site for the collection of new samples may begin.

The primary objective of the new scientific phase is to head towards the ancient river delta, that is that characteristic fan-shaped area clearly visible thanks to satellite images and which for this reason determined its choice as the landing area of ​​the Mars 2020 mission. The signs of the confluence of an ancient river that most likely filled a lake inside the Jezero crater are clearly visible and the place could be particularly rich in carbonates, minerals which, as terrestrial geology teaches, can preserve fossil signs of life. ancient and be associated with ancestral biological processes.

Let’s see some photos of the last two days, both made with the help of the two navigation cameras, also known as NavCam, positioned on the right and left in front of the rover. The images uploaded by NASA were single, but we decided to merge them to obtain much more fascinating panoramic photos.

But there is an even more curious detail that we want to tell you about and which luckily for us has been immortalized in a photo. You may not notice it immediately, yet the following image contains something “non-Martian”. Try to understand what it is, then we provide you with the following explanation. 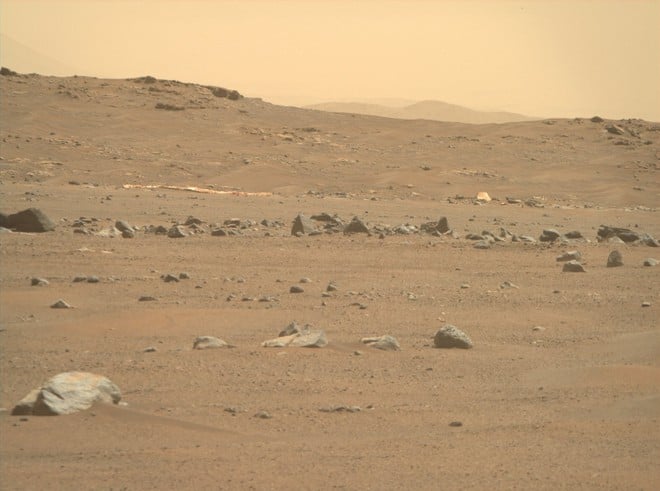 Looking carefully you can see to the left the remains of the parachute used by Perseverance to curb its atmospheric entry on February 18, 2021, when it arrived on Mars. And that’s not all, as on the right you can see another component of the arrival journey quite clearly, namely a portion of the heat shieldthe one that protected the delicate NASA technology from overheating due to friction with the Martian atmosphere (remember the famous 7 minutes of terror?)

But now let’s talk about Ingenuity, the small helicopter that has been promoted from experimental technology to reconnaissance, and which, as you can see from the map above, is now a short distance from the Perseverance rover. 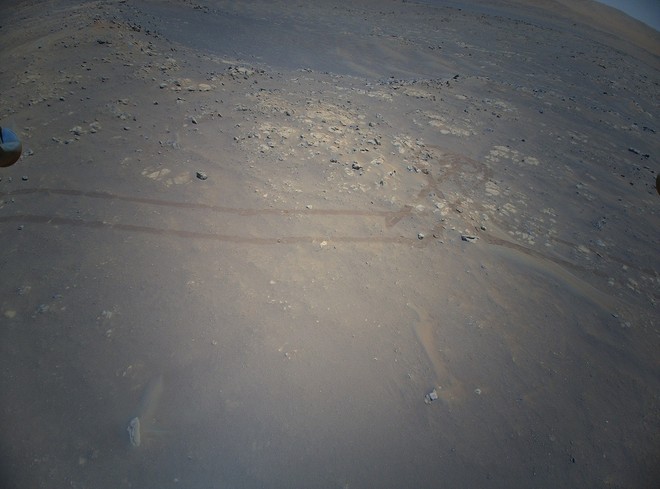 The little Martian helicopter recently completed flight number 25but it was not just any sequence, but of the longest route ever flown to Mars by Ingenuity. On April 8, over 700 meters were flown in one go (704 meters to be precise) and the entire flight lasted just over 161 seconds, just under 3 minutes.

But that’s not all, in addition to the distance record, the speed record has also been broken. reaching 5.5 meters per second for the first time. Previously, 5 meters per second had never been exceeded, only reached during flights 9, 10, 11 and 15. Ingenuity therefore switched from Airfiled P to the new one characterized by the letter Q.

Although NASA has not yet spoken properly on the matter, a more intense reconnaissance phase should now begin for Ingenuity, which could very soon be used to explore the area in which Perseverance will try to advance in advance. The goal will almost certainly be that of identify the safest areas for the passage of a land vehiclewhich is Perseverance.

For the moment the news from Mars ends here, but the journey is really coming to life and we can’t wait to share with you more details on the new phase of the scientific campaign. Read on for more information on the Mars 2020 mission.