In the first appointment dedicated to a series of unsolved scientific puzzles we dealt with Tabby’s Star, a celestial body that has fueled the fantasies of many among the supporters of the existence of extraterrestrial civilizations, and today we are dealing with another cosmic object baptized with the Oumuamua’s name, which has left the scientific community equally baffled.

Although the two topics are completely unrelated to each other, someone could also unbalance with the imagination and find a link between Oumuamua and a possible technologically advanced civilization such as the one that may have developed around Tabby’s Star, but before traveling too much with the fantasy we try to understand what we are talking about and why Oumuamua continues to arouse so much interest. So let’s reconstruct the history of this incredible cosmic object that has only been known to us for a few years.

THE DISCOVERY OF OUMUAMUA 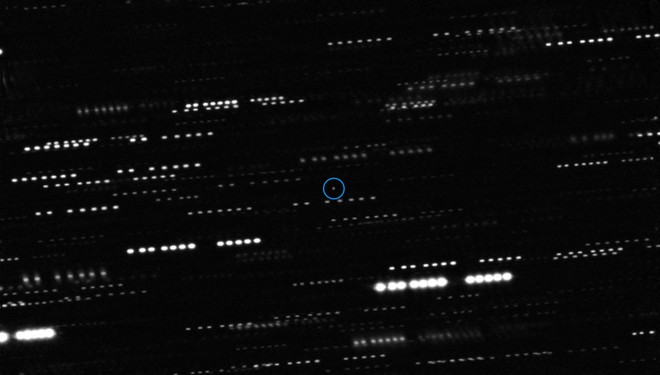 It was October 19, 2017 when physicist and astronomer Robert Weryk, who was at the Haleakalā observatory in Hawaii, during a normal day of work with the Pan-STARRS telescope as part of the Near-Earth Object Observations (NEOO) program , first observed this unusual cosmic object which came immediately identified as extrasolar, that is, coming from interstellar space. And this was an element of primary importance, since Oumuamua was the first object of this type to be identified with certainty. His discovery, however, came late, in fact, Oumuamua had already exceeded the point of maximum proximity to the Sun for 40 days and was already in the process of receding.

The object was officially named 1I / 2017 U1 by the International Astronomical Union (IAU), responsible for granting official names to bodies in the solar system and beyond, but in addition to the technical name the Pan-STARRS team decided to nickname it Oumuamua, which in Hawaiian means “a distant messenger who arrives first”. When he was first observed he was traveling at the dizzying speed of 87.3 kilometers per second (thanks to the acceleration impressed by the sun) and was classified as a comet, subsequently it was defined as an asteroid, only to show again the signs of a behavior similar to that of a comet, and it would not end here. What was it really about?

It is good to start with its appearance, at least as bizarre as its characteristics. Oumuamua immediately seemed a rocky object but with an extremely elongated shape, so much so that it was repeatedly compared to the appearance of a huge cigar. Although its size has never been precisely defined, the few observations available have revealed a length of about 400 meters (or at least between 100 and 1000 meters) and a width of 40 meters. Naturally, these are estimates, but the length / width ratio, absolutely unprecedented for a comet or an asteroid, was particularly striking right from the start. Nothing like this had ever been observed, but we knew that this unusual object was allegedly not connected to any star system and had roamed the Milky Way undisturbed for hundreds of millions of years before accidentally encountering our solar system.

What science had theorized for decades, namely the existence of interstellar objects, was finally proved by the facts. And of course it was only the beginning of the observations and the major telescopes around the globe set to work to unravel the matter, but the time available would have been very short, as Oumuamua was continuing his journey at breakneck speed to get away from it forever. our solar system. 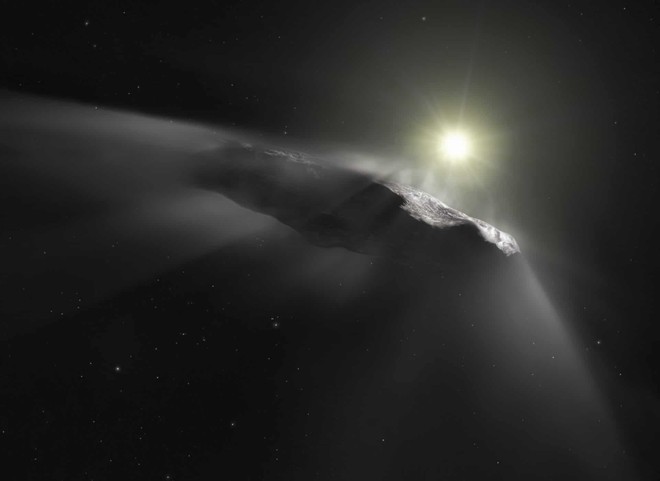 Immediately after its discovery, telescopes around the world, including ESO’s Very Large Telescope in Chile, were called into action to measure the object’s hyperbola, brightness and color.

By combining images from the FORS instrument on the ESO telescope with those from other large telescopes and using four different filters, a team of astronomers led by Karen Meech of the Institute for Astronomy in Hawaii found that Oumuamua featured strong variations in brightness and rotated on its axis every 7.3 hours. And this was a first point to leave everyone dumbfounded, since no asteroid or comet known to our solar system had similar variations in brightness, and above all such a large ratio between length and width. The most elongated objects we had seen so far were no more than three times their width, and it was this particularity that attracted many scientists to the theory of artificial origin. It was later discovered that Oumuamua had a reddish color, similar to objects in the outer solar system, and that it was completely inert, i.e. without the slightest hint of dust around it.

These properties suggested that Oumuamua was a very dense celestial body, composed of rock and probably metals, but without water or ice externally, and that its surface had been reddened as a consequence of the effects of the radiation of cosmic rays that had acted in the course of hundreds of millions of years.

It was also tried to understand where it could come from and, according to the calculations made it may have come from the constellation of Lyra, perhaps from its brightest star, Vega, but on this point there is no absolute confirmation. The acceleration suffered as it approached the Sun was then observed, and also in this case the data were not in line with forecasts. No comet had ever experienced such an acceleration during a close passage to the Sun and this was an unexpected feature that did not allow it to be cataloged with certainty right away.

Usually the surface ice of comets creates a push effect as it sublimates due to solar heating (a phenomenon known as “degreasing”), and this acceleration is known and measurable. Yet Oumuamua did not have a clearly visible tail and the measured thrust was completely unusual, i.e. greater than expected.

It was also further confusing astronomers its strongly hyperbolic trajectory , which due to the gravity of the Sun led it to make a sharp turn starting to move outwards, passing under the Earth’s orbit and subsequently over the orbits of Mars and Saturn. BUT the time to observe it would run out very soon and by the end of December 2018 it went too far for scientists to continue observing it. We only had 1 year to study it and it was not enough to arrive at a shared definition, but there are several theories on the field: what conclusions did we arrive at?

WHAT OUMUAMUA? THE MAIN THEORIES 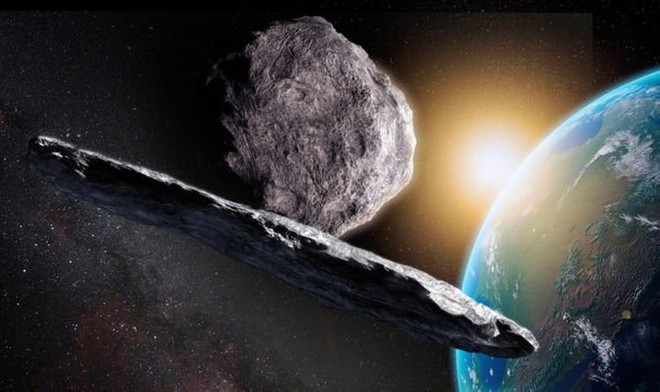 On this point and in these 5 years we have really heard of everything and although the main theories have focused first on the possibility that it is a comet, and then come to consider it the first interstellar asteroid, the mystery remains and the division that c ‘is within the scientific community is proof of this. Leaving aside the possibility that it may be an asteroid or a comet, let’s see which are the most popular alternative theories.

Last year, Arizona State University astrophysicists Alan Jackson and Steven Desch tried to answer the lack of a wake and unusual acceleration, claiming that Oumuamua could be a huge chunk of nitrogen ice ejected from an exoplanet similar to Pluto. This material could have generated the thrust necessary for the acceleration shown, and at the same time would have made any tail invisible to our telescopes. Yet even on this point not everyone agrees and among these Amir Siraj, an astrophysicist at Harvard University who believes that the rarity of nitrogen in the universe would make it difficult for the formation of a similar cosmic object, and with such a high mass.

But there was no lack of theories that speak of its possible artificial origin and, although most astronomers are of strongly opposed opinion, there are figures of great importance on the international scene, such as that of the theoretical physicist Avi Loeb, who think differently. In his recent book “Extraterrestrial: The First Sign of Intelligent Life Beyond Earth”, Harvard University scientist Avi Loeb unhesitatingly embraces the idea that this object is some sort of highly evolved alien laser sail. Loeb essentially argues that it is a probe driven by the propulsive radiation of the starlight itself, created by the ingenuity of an extraterrestrial civilization more advanced than ours. In support of this theory, the scientist argues that there are characteristics. like the extremely elongated shape, “statistically different from those of any object cataloged up to now by human beings”, as well as its brightness and the absence of degreasing or debris along its path.

So what could Oumuamua be? The idea that thinking of a clear distinction between comets and asteroids is now too simplistic, as the most recent observations seem to indicate the possibility that there are several in-between ways. Let’s think for example of Ceres, the asteroid that has salts on the surface that are able to sublimate like comets do. It is clear that certain concepts will need to be revised and Oumuamua reminded us that outside our solar system there is still a lot to discover.

ONLY GETTING CLOSER WILL WE KNOW MORE 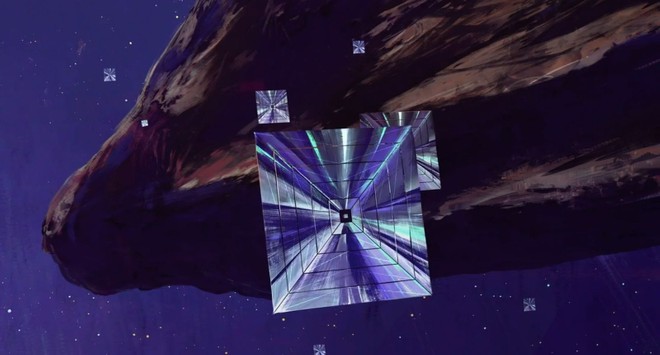 Oumuamua’s brief passage reminded us how the observation of such cosmic objects is almost impossible when they are at great distances and with current means. We can discover many characteristics but the appearance can only be hypothesized and therefore without a real approach it becomes impossible to know more. But would it really be possible to reach Oumuamua for a possible close study? The members of the Lyra project, funded by the Initiative for Interstellar Studies organization say yes and are working on some proposals for missions with a very specific objective, namely to closely investigate the interstellar object.

But how can we do that given the insane speed at which Oumuamua travels (about 26 km per second currently, having slowed down from the 87.3 km per second reached following the strong push of the Sun), when the fastest probes ever made by man (Voyagers 1 and 2) are traveling at about 17km per second? The idea is to chase it by exceeding its current speed by exploiting the current chemical propulsion to its full potential (but nuclear propulsion and the use of laser sails are not excluded) and a gravity assist caused by Jupiter using the Oberth maneuver.

Yet the operation would not be simple and the mission it should start by 2030, taking at least 17 years to reach the goal. And even if it were timely to develop a highly efficient probe capable of making such a mission real, the costs could be exorbitant. Who will finance such an operation? The European space agency could be interested and such a probe could also be useful for the observation of the second interstellar object identified, the comet Borisov discovered in 2019, but at the moment there is no full support from the scientific community (not all believe it feasible) and ESA has not yet considered this possibility.

The question has no answers at the moment and therefore we can only rely on the data available to us. The Oumuamua mystery remains unsolved for now, but it is so fascinating that we will continue to follow its developments.