Netflix communicated the financial results of the first quarter 2022 and the data is far from encouraging. The streaming giant has recorded for the first time in the last ten years a decline in subscribers: 200,000 fewer worldwide compared to the fourth quarter of 2021.

Even more worrying is that the negative trend is destined to continue in the coming months: according to official estimates, in the second quarter of the year the number of subscribers could fall by another 2 million. In the letter to the shareholders, the management acknowledges the situation, providing the first explanations:

Our revenue growth has slowed considerably, Covid clouded the picture by significantly increasing our growth in 2020, leading us to believe that most of the slowdown in 2021 was due to the push forward brought about by Covid.

In the last quarter the the number of subscribers to the platform thus decreased from 221.84 to 221.64 million. Netflix still remains the number one in the streaming platform market but these results are far from those expected for the first quarter of the year which went in the direction of a further increase in subscribers (+ 2.5 / 4 million, according to official estimates).

The reasons for the slowdown would be multiple:

The last aspect deserves a closer look: Netflix confirms that 100 million families access the contents of the platform through shared passwords and that this factor makes it more difficult to increase subscriptions in many markets. Management is aware of the need to take corrections, but introducing a system to prevent password sharing will take some time, about a year according to CEO Reed Hastings himself.

A MORE ECONOMIC PLAN IS EVALUATED WITH ADVERTISING

Taking note of the collapse of subscribers, Netflix starts running for covermaking more concrete what a few weeks ago was a simple, vague hypothesis and years ago a perspective completely excluded: the introduction of a subscription plan made cheaper by the presence of advertisements. It is the CEO of Netflix himself – in the past uncompromising on the subject – to underline:

Anyone who has followed Netflix knows that I am against the complexity of advertising and am a big believer in the simplicity of subscriptions. But as much as it is, I support consumer choice even more, and it makes a lot of sense to give what consumers want, who would like to have a lower price and tolerate advertising.

For now there is no talk of detailed timing, but it is clear that this is an important turning point in Netflix’s commercial policy and that the effects will be seen in the future. 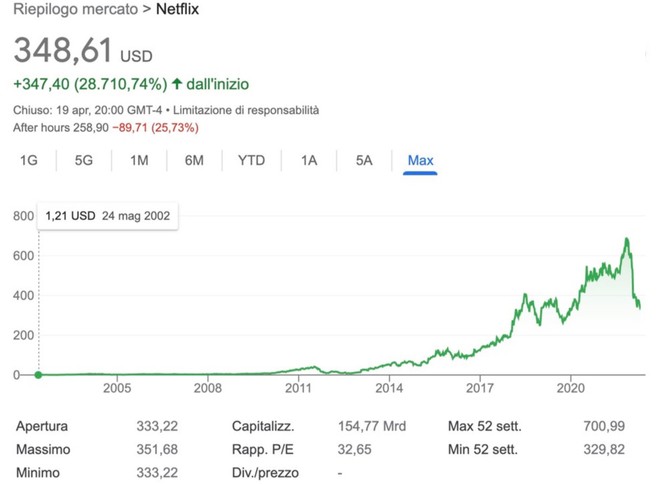 In the short term, however, Netflix feels the blow of a disappointing quarterly – especially considering the expectations. The streaming platform’s stock has lost over a quarter of its value in after hours trading.