A research team led by astrophysicist Simone Scaringi of Durham University in the United Kingdom has identified a kind of stellar explosion never seen beforewho was baptized micronova. In fact, scientists have noticed some anomalies in the data provided by NASA’s TESS (Transiting Exoplanet Survey Satellite) satellite, and have decided to investigate them using the X-shooter installed on ESO’s (European Southern Observatory) VLT (Very Large Telescope). And apparently it was worth it, because thanks to these analyzes it was possible to isolate and understand an unprecedented phenomenon. 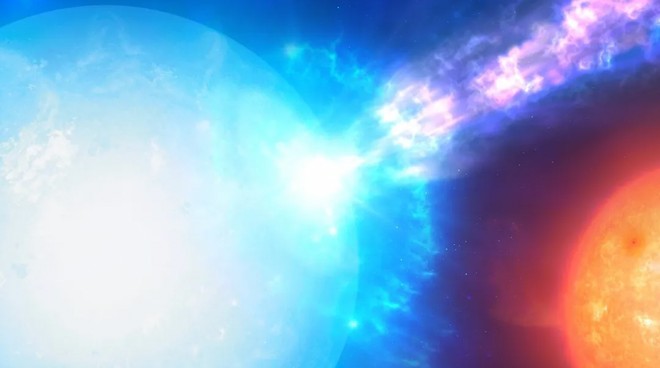 As illustrated in the study published in Nature (you can find it at the link in SOURCE) and suggested by the name, a micronova is an explosion smaller than a classic nova or a supernova (like THIS), but still powerful and capable of burning enormous quantities of matter within a few hours: astronomers speak of the equivalent of 3.5 billion pyramids of Giza, or one thousandth of the mass of the Moon.

The discoveryas Scaringi explains, it is particularly important because it is capable of increasing understanding on the different dynamics that can generate thermonuclear explosions in stars:

We first discovered and identified what we call the micronova. The phenomenon challenges our understanding of how thermonuclear explosions occur in stars. We thought we knew, but this discovery offers a totally new way in which they are made.

Radboud University astronomer in the Netherlands Paul Groot, co-author of the study, goes into more detail, and illustrates how the unexpected finding relates to how hydrogen fusion can occur:

For the first time, we have seen that the fusion of hydrogen can also occur in a localized way. Combustible hydrogen can be contained at the base of the magnetic poles of some white dwarfs, so that fusion occurs only in those poles. This leads to an explosion whose strength is approximately one millionth of that of a nova, hence the name micronova.

WHY DID WE NOT DISCOVER IT BEFORE?

Like the already nine notes, too micronovas are stellar bursts that occur on white dwarfs, or stars at the end of their life cycle with a mass comparable to that of the Sun, but similar in size to the Earth. A white dwarf that is inside a binary systemthat is, composed of the interactions between two nearby stars, it can steal material – especially hydrogen – from its companion.

Once this subtracted material precipitates on the surface of the white dwarf, it triggers the fusion of the hydrogen atoms into helium at very high temperatures, thus generating the explosion. The point, as underlined by Groot, is that if on the nine the explosion affects the entire stellar surface, on the micronova the detonation is localized, and therefore reduced in power and duration.

It has been noted that the micronovas particularly affect white dwarfs with strong magnetic fields that direct the material stolen from the other star of the binary system to their own magnetic poles. The late discovery of this phenomenon can be traced back to its “location”: it is in fact events that can be quite common in the universe, but which are particularly difficult to record due to their rapidity.