Mercedes EQS is the electric car that opens a new era for the Germans, while joining a previous range that uses a different approach. EVA is a dedicated platformwhile the SUVs (EQA, EQB and EQC) instead exploit a platform shared with the thermal world and adapted to house the batteries.

On an industrial level it is the right choice, that of a manufacturer who has an eye on the present, in many segments diesels are still in demand, but who already has the right technology for the future, so as to be ready for any total change. of paradigm. 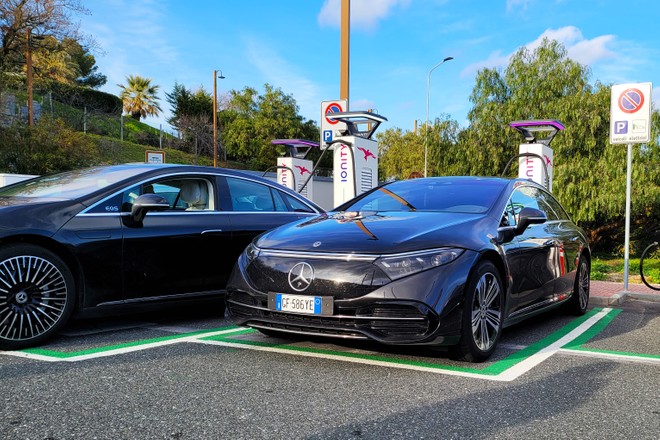 One of the points that many electric cars have always envied Tesla is its network of Superchargers compatible with fast charging and ease of use: you arrive at the stall, take the high-power cable, plug it in and you’re done. With EQSMercedes has managed to capitalize on its collaboration with IONITY and has achieved excellent results.

Arrived at the charging station, one of those on the motorway with attached services for coffee break, lunch and toilet, I don’t have to use cards or applications and the experience is just the premium one (here it went differently). I take the cable, insert the CCS Combo 2 connector into the car port and the process starts.

In this specific case, the lunch break (car stopped for an hour) took place just before recharging from IONITY and the effect was immediately seen on performance. Charging was then started with the battery “cold”, unlike what happens on a trip where, after two or three hours on the highway, you stop at the IONITY station with the battery already at temperature and ready to immediately accept more power.

Despite an unfavorable situation, the battery management system immediately worked to maximize performance. Starting at 114 kW was followed by a curve that grew quickly, reaching 146 kW later 12 minutestime in which we have stored 24 kWh. In 17 minutestotal time of our recharge, we have stored 35 kWh. 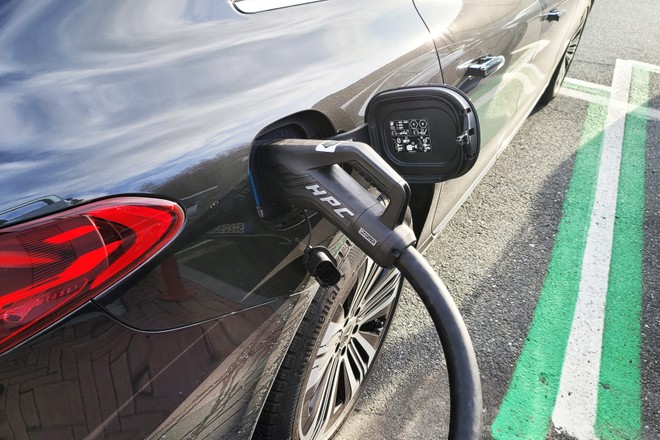 Waiting for a more in-depth test on recharging and consumption, not dictated by the technical times (see lunch break) and by the double driving to which the preview events force us, we can begin to outline a first picture on Mercedes EQS, a car that is very faithful to the concept of luxury and technology that it wants to convey.

The first test confirmed about 430 km of motorway autonomy with two people on board and average fuel consumption, at 140 km / h of adaptive cruise control, with variable traffic and the exit and return to the motorway for the lunch break, of 25, 2 kWh / 100 km

The Germans quickly learned how to move for reloading, creating Mercedes me Charge which includes top-up services throughout Europe with a single account where you can enter your billing data. Regardless of the columns used, all compatible, at the end of the month we will have a single account. For one yearthen, it is included free and unlimited top-up at IONITY stations. After the first year, you pay € 150 / year to recharge at € 0.29 / kWh at IONITY: the convenience is almost immediate, already after the first 5 full recharges.

THE NUMBERS OF EQS 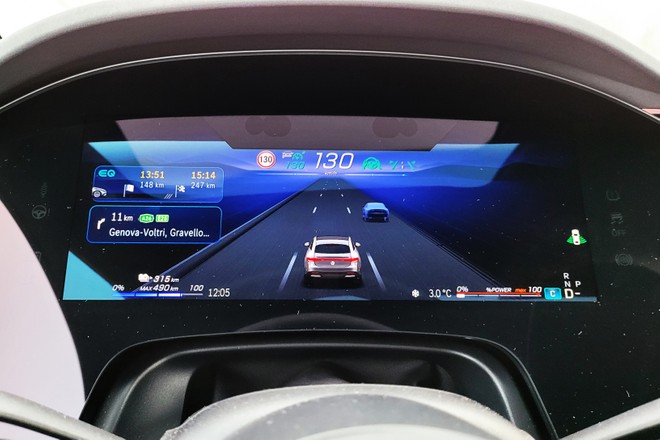 Looking at the technical data sheet, there are many numbers that make the EQS a true flagship, and on the other hand Mercedes has always been one of those companies that has been a forerunner to the entire automotive world. Few people know that some of the technological solutions that we all exploit today on cheaper cars exist because the German brand developed them, often in collaboration with Bosch, which then translated them years later into technologies within everyone’s reach by exploiting the economies of stairs.

Inside, then, it is not so much the numbers of the thumbs of the various OLED displays the ones that matter, although interesting:

but it is rather the step forward made by MBUX Hyperscreen. It always remains the best (in the car world, we exclude Alexa and the like from the competition) in voice recognition, but it has an interface that is very fluid, graphically in step with the times, well readable and also easy to consult. 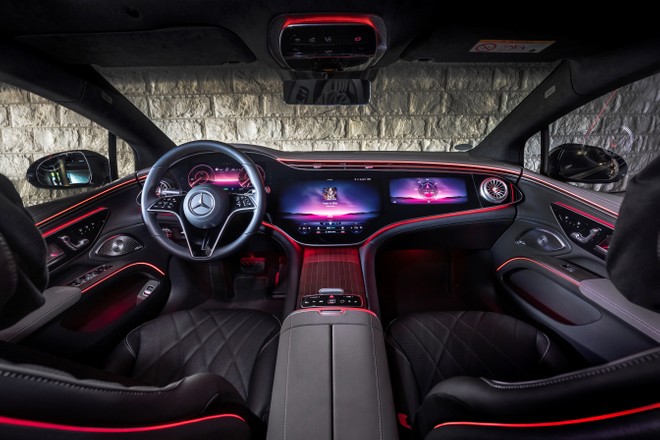 In short, they have guessed all the aspects and to appreciate the software and usability tricks you will need months, because every day you will discover something new that will make you understand when captivating graphics are not enough to make a complete system. 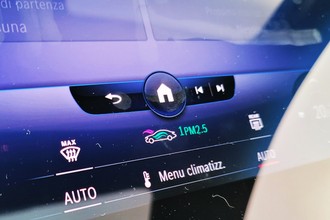 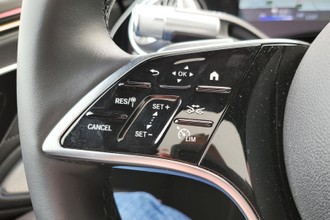 There is something that still needs to be improved, and it is the oleophobic treatment of the tactile touch surfaces and screens, the images speak for themselves. If we can pass over it on a “medium / low” range, an extra step should be taken on the flagship.

THE FEELINGS OF THE EQS 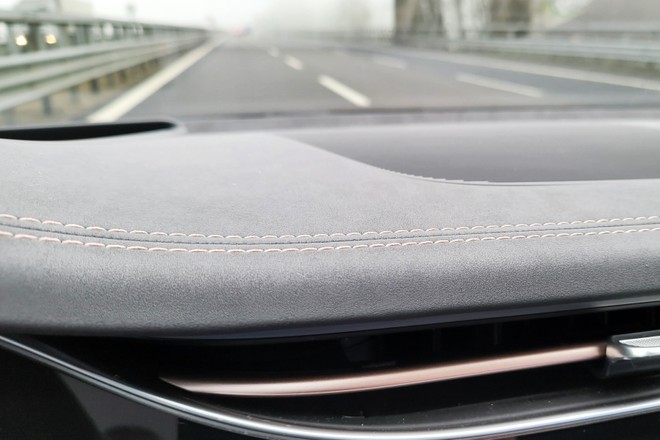 It goes without saying that on the EQS you travel in total comfort and that driving is like a flagship: easy, precise, powerful. We are talking from a car with prices that few can afford. So why waste time reading these lines?

Simple, because it is necessary to reconnect to the discourse of the previous paragraph and take this test of the EQS as an anticipation of those technologies and those characteristics that, over the years, will also appear on lower range cars, then becoming standard in the future a little. farther. On the other hand, we had talked about it here, the second rearview mirror was an option for the rich at the beginning of the history of the car.

It is equally true, however, that Mercedes is taking a notable leap forward in its positioning, detaching itself more and more from the premium market to embrace a more sophisticated and attentive luxury for the driver and passengers. The seats are masterpieces of comfort, with adjustments that allow you to reach an extreme level of customization and also benefit the way you travel. The difference between getting out of the car with the classic discomfort accumulated on the back and arriving fresher at the level of the joints.

The movement of the seats within the Energizing Comfort and Energizing Coach suite is an almost imperceptible help in relieving stress. The electric seat makes small movements that activate the muscles, change position slightly and avoid the immobility we are forced to on long journeys. 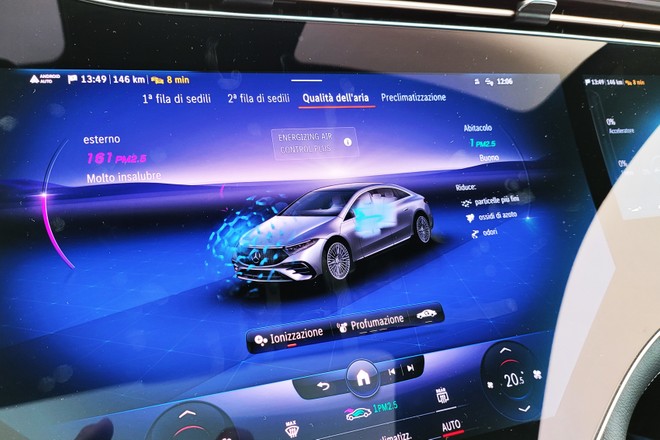 Traveling well also means breathing better. Mercedes EQS has given up on frunk, but not due to the technical inability of the platform. The empty space in the traditional “bonnet” here is used by a huge HEPA filter aided by sensors that analyze the air quality.

The digital “nose” knows when to activate the recycling and microparticles and fine dust (99.65%) do not reach the passenger compartment, without forgetting that even exposure to viruses is considerably reduced, in this case it filters the 86%.

READY FOR THE FUTURE 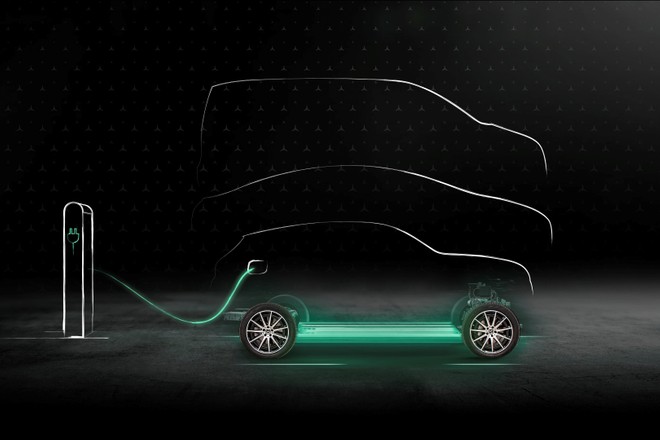 Now ready for the future, Mercedes has equipped the EQS with a digital platform that can be updated via OTA. What’s new is automatically downloaded from the car, but it’s not just the old concept of updating a map or points of interest.

Today we have entered a world of apps and services as for smartphones, with the difference that here the purchase of a subscription package can even affect the car hardware. An example? The four-wheel steering allows an angle of 4.5 ° for the rear but, with a click, it can be extended to 10 °. It means being able to have extremely compact vehicle handling when needed. 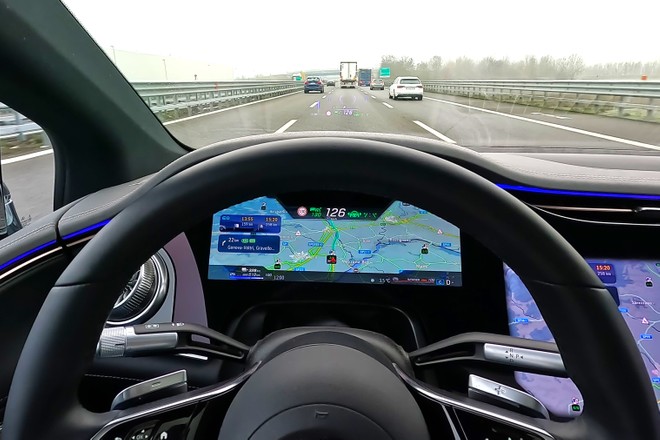 The prices are top of the range, EQS is the car for very few who want the best while traveling. Sporty in performance, but also dynamically interesting for being a representative berlinona: certainly not the one to take to the track, but it knows how to have its say on roads of all kinds, thanks also to all-wheel drive and four-wheel steering that make it manageable at the same time. and precise when cornering.