A few weeks after the arrival of the 5th generation iPad Air on the market (which we reviewed HERE) it is time to take stock. The question that resonates like a mantra in the mind of those who intend to approach such a device is always the same, this time viewed from a different angle: net of hardware specifications, the powerful Apple Silicon M1 and features, can an iPad – in this case an iPad Air – become a valid replacement for the PC when combined with a good keyboard? After all, using a peripheral results in a profound transformation of the experience of using a tablet and, if valid, it really can make a difference.

On the Magic Keyword, the Apple keyboard most suitable for the latest iPad generations, we have already spent many words: robust and solid, comfortable for typing, backlit, with a performing trackpad and more. Yes, but also very expensive: 339 euros to add to the value of a device that in the basic 64 GB version costs almost 700 euros is not a trivial matter, but the regulars of the bitten Apple also know – and accept – its price list.

On the market, however, there is no shortage of variants that are more accessible and no less performing than producers, first of all Logitechare quick to propose as an alternative to the Cupertino offer.

The Combo Touch is a case in point. This is not a new product, the launch dates back to last year to support the 5th generation 12.9 ” iPad Pro, 1st, 2nd and 3rd generation iPad Pro 11 ” and iPad Air 4th generation.

With great pleasure, however, we discovered that the keyboard is also compatible with the fifth and latest generation of iPad Air. And if it is true that “old hen makes good broth” (old so to speak), we could not refrain from testing it with the new entry of the family.

I used it for a few days and in this article I will tell you my experience. 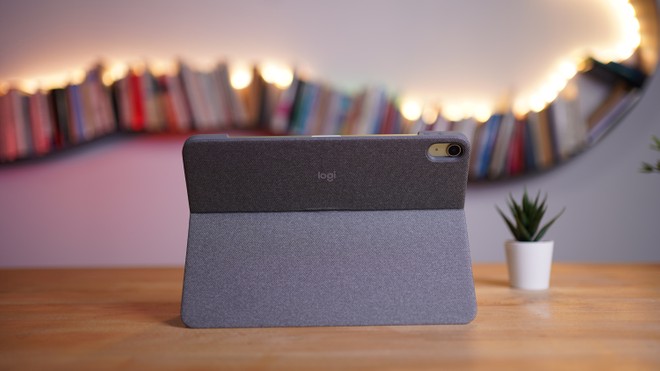 The Combo Touch has a sober and clean look, bordering on austere (thanks to the Oxford Gray color of the specimen in our equipment), decidedly more classic than the Magic Keyword and in contrast with the new pastel shades with which Apple has revived the iPad range.

Personally, the aesthetics did not impress me, but I recognize it is a subjective factor to say the least. In addition to the eye, however, it is also touch that wants its part: the material quality is good, the solid rubberized edge assumes greater protection and the fabric that wraps the front and back is rough and resistant to touch. The feeling is that, in the long run, this detail pays off: the rubberized body of the Magic Keyword will also be attractive, but it is much more vulnerable to scratches and fingerprints and spoils with the look, especially in the black version.

On the side edges we find the buttons for adjusting the volume and the holes that bring out the on and off button, the photographic compartment, the USB-C connector, the hooking of the Apple Pencil and the speakers. The interlocking takes place smoothly and the cover envelops the iPad in a firm grip that avoids the risk of any leaks from the seat. 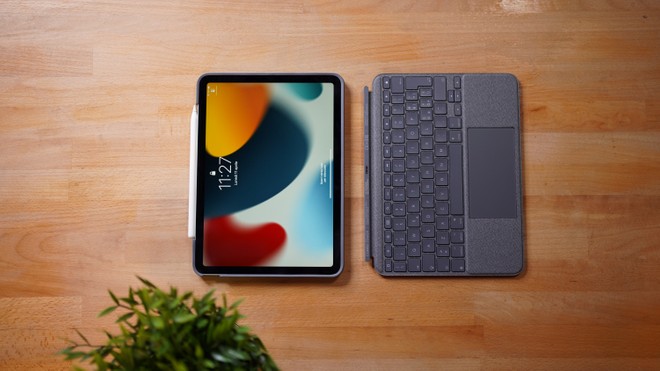 Nomen omen. The accessory is called Combo because has a dual soul, in fact, it can be “broken down” and used as a simple protective cover for iPad. However, it is not possible to use the keyboard separately as it needs, in order to work, to be hooked to the magnetic contact points on the edge of the cover, with a flap of the lower part of the latter that is extracted transforming itself into an adjustable rear stand. (remotely reminded me of the Microsoft Surface form factor). I break a lance in favor of the latter, who generously expands the degrees of inclination of the device (there are 50) compared to the counterpart of the Apple, which, on the other hand, remains not very mobile. However, requiring a physical support on which to “stretch”, the Logitech keyboard is perhaps less suitable for situations of precariousness and movement.

Unlike Bluetooth keyboards, the The Combo Touch is connected to the iPad via the Smart Connector, which will allow it at the same time to “self-feed” by relying on the battery of the tablet. No integrated battery, therefore, nor on / off switches, just like the Magic Keyboard. And also no fear of consumption, because the Combo Touch has very little impact on the autonomy of the iPad. 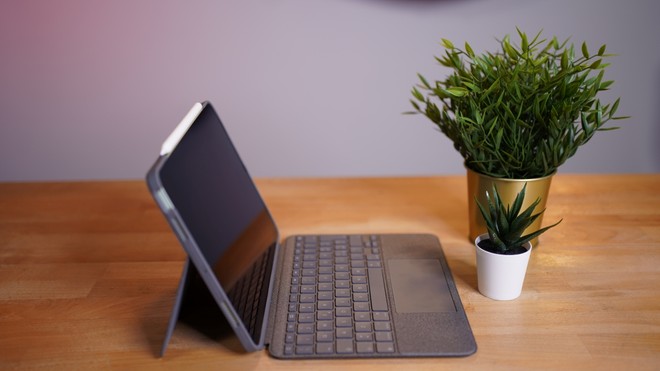 As you can already guess from the previous paragraph, this Logitech keyboard for iPad is quite versatile and is declined in four modes of use depending on the activity you intend to carry out. My favorite, the one dedicated to typing (keyboard + stand), proved to be comfortable and functional. I have not disdained the use of the cover alone for viewing contents or for reading (without keyboard and with the arbitrary use of the easel) but, having no talent for pictorial art, I could not express myself on the drawing mode (fully extended stand for drawing with Apple Pencil or the analogue of the Swiss manufacturer, the Logitech Crayon).

The trackpad of the Combo Touch supports “click-anywhere” and is much wider than that of the Magic Keyboard, which is undoubtedly an advantage if you usually use it frequently and if you like a generous space for navigation, the multi-touch gestures and other iPadOS features. Good reactivityalthough I noticed a slight (negative) difference compared to the Apple keyboard.

An essential element for a nocturnal person like me is there key backlightingand in this case I was not disappointed: those of Logitech adapt to the surrounding environment with 16 levels of brightness, adjustable using the hotkeys positioned at the top of the keyboard – absent on the Magic Keyboard – which also allow you to control the volume and multimedia content, quickly return to the home screen and much more.

Turning to the feeling of writing, the keys of the Combo Touch are soft and typing is fluent and quite precise. However, I noticed less punctuality than the Apple keyboard, and it happened that the input was not received instantly, especially by the space bar. More than a flaw, I suppose it’s just one different way of pressing the keys, which only needs more vigor. In short, a matter of habit. 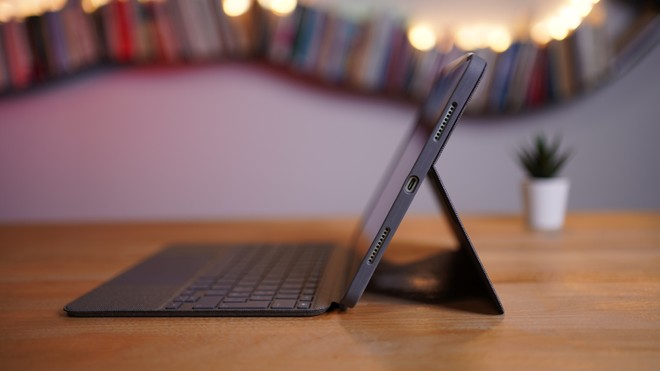 Summing up, the Logitech Combo Touch can therefore be considered one valid alternative to Apple’s Magic Keyboard? Absolutely yes. Not only for the competitive price, we are talking about 199 euros for the version compatible with 4th and 5th generation iPad Air (about 140 euros less than the Apple keyboard), mitigated by the street price. But also for the good performance, the robustness of the materials, the versatility and the transformative capabilities that make it credible even in the role of a simple protective cover for the device.

A praise to the touchpad so spacious, which from my point of view is an advantage not to be underestimated, especially for professional use of the tablet. It is not far behind key backlightingessential for those who use it frequently at night, with which it is possible to easily intercept each key even in poor lighting conditions.

Maybe I would have liked a more attractive design, more colors available and a lower weight, but all in all these are not so relevant details. For the rest, it is difficult to find others in the, so she passed with flying colors.

UNCOMFORTABLE TO USE IN PRECARITY SITUATIONS