As is well known, LG has stopped making smartphones and has invested its resources in other fields of technology: one of these is that of true wireless headphones, and in fact for some months the Tone Free FP9s have also been available in Italy.

Latest born in LG together with FP5, these FP9s represent the top-of-the-range choice of the new generation of earphones of the brand and aim very high, both for the price range and for the promised improvements.

If on one hand the famous UVnano case dedicated to earphone sterilization is back that distinguishes the series – we had also seen it on the FN4 and FN6, of which you can find the review here – on the other hand there is a new shape that promises to be more ergonomic, active noise cancellation and an original functionality Plug & Wireless which transforms the case into a wireless transmitter for sources without Bluetooth. Here is the verdict net of a few weeks of use. 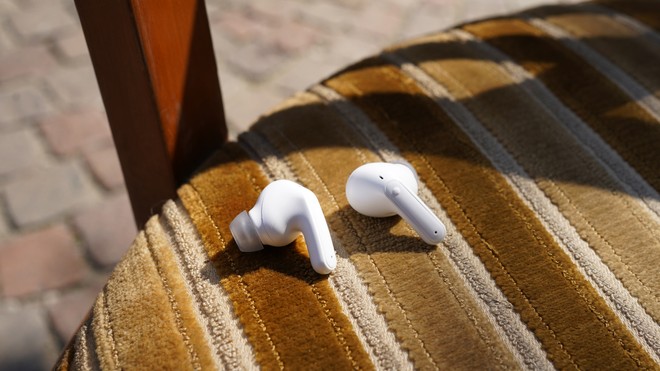 The new Tone Free FP9 they bring with them a renewed design that I personally enjoyed very much: the manufacturer defines it as “concave” due to the name of the ear cavity where it rests, and I must say that you actually feel that there is something different in the points of contact with the auricle, because the pressure is not all concentrated on the rubber, as often happens, but distributed more evenly.

A shape that, together with the low weight (we are talking about 5.2 grams for each earphone and 36.7 grams for the case), helps to make them really very comfortable: I wore them for several hours forgetting I have them, also thanks to the very contained rod that protrudes slightly from the ear but still does its duty. All these considerations are obviously very subjective because each ear is different, but I would like to advise you to give it a chance from this point of view. 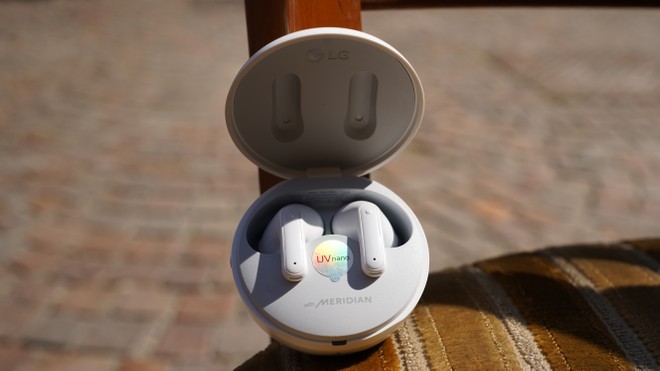 The case is also appreciable, which despite being light still transmits a feeling of solidity thanks to the good quality of the materials and the hinge of the lid, reliable. Matte finish (excellent for avoiding scratches), it slips easily into your pocket and has a single LED that indicates the state of charge, a USB-C on the back and a physical switch for the Plug & Wireless mode which I will talk about shortly.

As anticipated at the beginning a welcome return is that of UVnano technology that allows you to sterilize the earphones when the case is charging with the cable: a surplus that does not hurt, considering how boring ear infections are. Also present is the IPX4 certification against water splashes, so good for training in the rain or sweaty. In short: elegant, efficient and ultra light, they are promoted for design and build quality. 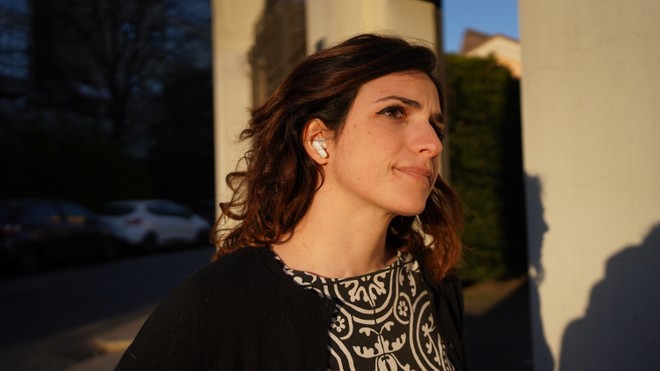 Let’s move on to the sound chapter and start from quality in call, which is truly noteworthy: despite the short shaft, the voice is captured well and effectively isolated from the surrounding noises, and in the same way the interlocutor is heard clearly and distinctly; good also the quality of the bluetooth connection, which does not jump. So better than the average of TWS headphones in circulation, but absolutely in line with those of the same price range.

There is also one whisper mode – unprecedented as far as I am concerned – which allows you to hold the left earpiece in your ear and remove the right to bring it to your mouth as a microphone, in order to make you heard while speaking in a low voice or in a particularly noisy environment. But be careful not to raise it suddenly, because the algorithm that amplifies your voice risks “breaking” the eardrums of the listener (I take this opportunity to apologize to my test interlocutor).

I would say that the vocation of these LG earphones is precisely that of communication, and indeed I also point out the excellent transparency mode, which can be declined in two versions: a generic one to hear the surrounding noises such as traffic or station announcements and a specific one that amplifies the voices of the people around you. It works very well, at the level of the AirPods which are an industry benchmark. 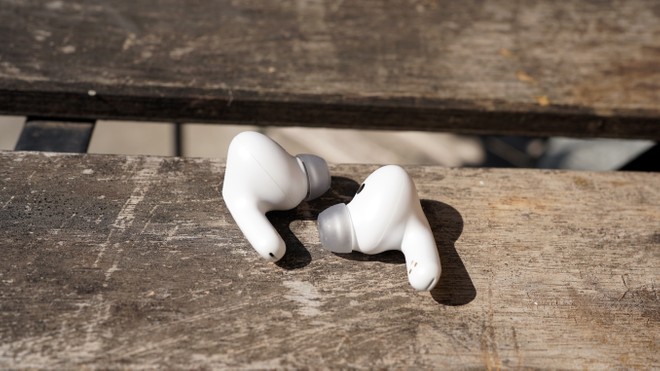 Active noise cancellation, on the other hand, is average, and acts above all on very low frequencies such as that of the dull noise that is heard in the background when traveling on trains and airplanes; less on that of the voices you might hear in an office, so think carefully about your needs in this regard, if you need to isolate yourself almost totally, I refer you to the ANC for example of the Samsung Galaxy Buds Pro.

Also music playback is average for the price range: balanced, without excessively liming on the bass, it returns an accurate sound scenario that is not particularly enveloping; from this point of view there are better performing earphones, starting from the Sony WF-1000XM4 of which you can find the review here.

The sound, however, is not metallic nor does it undergo any kind of distortion; the maximum volume is above average and the supported formats are SBC and AAC (therefore nothing HiFi). An equalizer with some presets is also available in the app, of which the most significant seemed to me the one dedicated to 3D audio, which seems to amplify the space and is designed to improve the experience with movies and games. Compared to audio playback on a PC, I found a higher latency than on a smartphone. 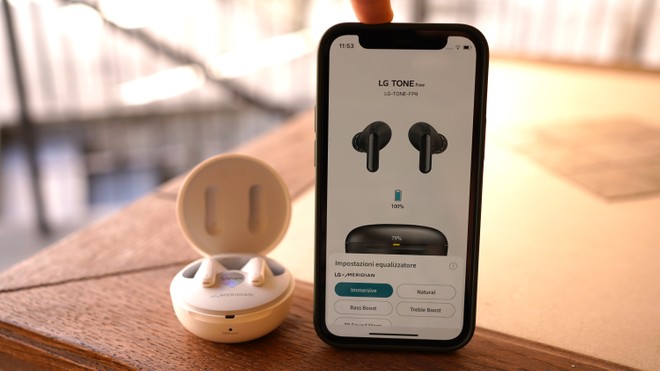 The app is called LG Tone Freeand is available for both Android and iOS with the same functionality. I loved its minimalism, aesthetics and claritybut on the other hand I did not expect anything less given the price range at which they are launched.

By scrolling through the home page, you can adjust the transparency mode and the cancellation of the sound (on three levels, where however I have not noticed particular differences), manage the equalization with some presets, access the experimental modes (including the whisper one) and customize most of the touch controls.

For example, I have set one tap to stop or resume playback, two taps on the right earphone to raise the volume and two taps on the left to lower it and three taps to go forward or backward in music playback on the right and left earphones respectively. The only command that cannot be customized is the long press, which instead serves to switch from active noise cancellation to transparency mode. I was happy with it.

The only drawback from this point of view is the absence of the multipoint (at least as regards the present update) which would allow you to connect to two devices at the same time without having to switch by hand. Given the presence of Bluetooth 5.2 this mode could be supported, and on the other hand according to the online specifications of the product it should be there; I therefore trust in a future update that will implement it.

The function deserves a separate chapter Plug & Wirelessthat transforms the case into a wireless transmitter for audio sources that are originally born without bluetooth. Just move the physical switch to the right of the case and connect the USB-C / 3.5mm jack cable supplied in the package on one side to the case and on the other to the sound source to listen to it directly in the earphones. A function that is useful, for example, to watch movies on the plane or listen to the audio of particularly advanced treadmills, portable consoles and, why not, even TVs. 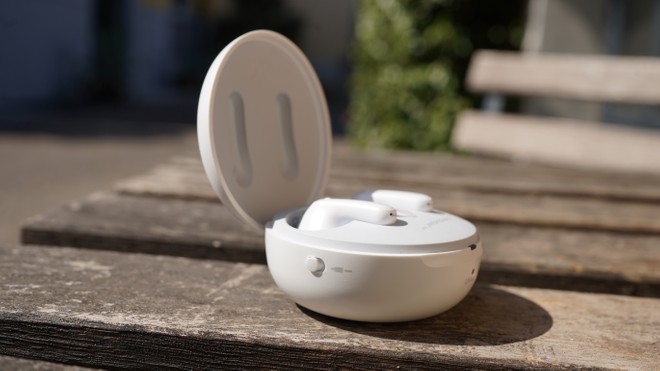 The data on autonomy is certainly a point in favor, because I must say that I found it in line with what was declared by the house: the earphones reach 9 hours of listening in music playback, which becomes 24 hours when charging the case without ANC; active noise cancellation takes a couple of hours away from the total estimate and an hour from that of the single earphone.

This means that you can comfortably do two days of work with an average use between calls and listening to music or, if you are on the phone all day, they will certainly accompany you until the evening.

Fast charging is also good, which allows you to have an hour of music with just 5 minutes of charging while support for wireless charging is missingwhich is usually found on headphones in this price range. 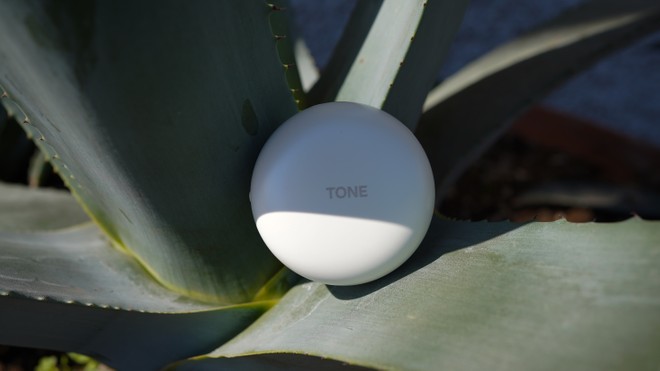 The new Tone Free FP9s come in two color variations, white or black, but I find that the list price of 199 euros is quite high compared to the alternatives available on the market, starting with Airpods to get to the aforementioned Samsung Galaxy Buds Pro or Sony WF-100XM4, being a high price range.

Obviously they are in good company, and in fact even on the manufacturer’s website they are already in promotion at 168 euros, while on other sites, such as that of Unieuro, they have also reached 139 euros. I found some headphones valid for the strengths that I have highlighted; if they are right for you, it is always a matter of subjective needs. In any case, the advice is to consider them in combo with an interesting street price.

The Tone Free were the protagonists even an episode of ours HD Behind the Scenes held live on the Instagram page of our channel and is then saved as IGTV. Here it is: