Coming in a few days on all gaming platforms, LEGO Star Wars: The Skywalker Saga was the protagonist of a preview presentation and test session in which we took part in the past few days. We can therefore give you our first impressions on the latest work of TT Games which aims to enclose all the trilogies of the franchise within a single title. As you can easily guess from the name chosen for this collectionThe Skywalker Saga retraces all the events that have the Skywalker family as protagonist, going back to the main events of all 9 films of the sagain addition to presenting several additions also coming from other spin-off works. For example, in the game section that we had the opportunity to try – entirely dedicated to Episode IV: A New Hope -, we noticed how the initial events of the film were enriched by sequences coming directly from the final scenes of Rogue One, thus going to create a more complete account of the facts.

Tale that players can choose to address in the order they prefer, since the initial screen of the game allows you to freely approach any trilogy (the classic, the prequel and the sequel) at any time, without placing any limits on its use. Each episode is preceded by a small LEGO diorama that allows us to briefly see the most significant scene of the film, often enriched with some comic elements in full LEGO style.

In fact, it is precisely the comedy that characterizes every game related to the famous bricks and even The Skywalker Saga does not lack interpret all the events of the 9 films in an ironic wayadding comic skits and quotes to the subculture of meme linked to the Star Wars franchise that will only get a laugh from diehard fans. 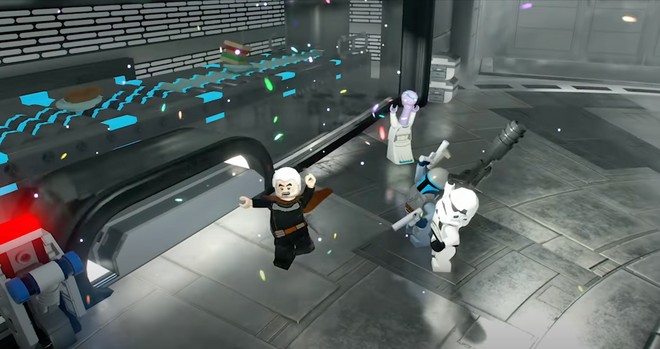 Being a game that touches all the films in the series, The Skywalker Saga includes virtually every planet explored by the films, as well as presenting also game sections set directly in space, during which you can take control of the most famous shuttles, starting with Luke’s X-wing fighter, but not only. Each planet is characterized by entire open sections in which to go hunting for secrets and Kyber Bricks (fundamental for enhancing skills through the various branches present), for which it is often necessary to intervene even with characters who are not directly linked to the reference film .

The structure of the game is in fact very open and not only allows you to tackle the plot in the order you want, but also to use characters that have been previously unlocked at any time, in order to use the skills to solve particular environmental puzzles and more. This means that each area immediately presents inaccessible areas if – for example – you do not have a Jedi with you who can use the Force to unlock a passage or a droid to interface with some particular terminal. In the segment of the game we tried we had the opportunity to move from the first phases with Leia (armed with a blaster for ranged combat) to the following ones with RD-D2 and C3-PO, Luke and Obi-Wan, thus giving us the possibility of try a good variety of different gameplay styles.

With Leia we were able to appreciate the effectiveness of the new automatic roofing system and the new camera position behind the player, which gives more control during firefights and otherwise. In addition to the blaster, in fact, Leia (actually all the characters) also has a system of combos, parries and break-defense that allow you to make the approach to clashes even more varied, with lots of rewards based on the level of combo reached.

Turning instead to the droids, you immediately notice how the movements and the combat take second place precisely because of the greater woodiness of the characters, who, however, can enjoy a unique advantage, that is, they are not attacked by enemies. The droids, in fact, they are not perceived as a threattherefore they allow you to face entire sections of the game completely avoiding combat, as long as you do not excessively provoke the enemies, who otherwise will respond properly. Playing as Obi-Wan instead, we have access to the lightsaber and the powers of the Force, which allow you to perform the classic Jedi mind tricks. Among these we have one that allows you to take control of the enemy to create confusion between their lines or to circumvent some obstacles (perhaps by opening a door that otherwise would not be surmountable in any other way), while the lightsaber also allows you to open passages on doors and containers.

Overall, the gameplay appears very rich and varied, especially if we consider that we can change the controlled character in real time by choosing from those in our group, so alternating the various styles of play is a matter of a few seconds. Also this time back the local multiplayer mode that allows you to face the game in 2 with the split screen. LEGO Star Wars: The Skywalker Saga is actually a real themed playground Star Wars and comes with the ambition to become a definitive collection of the series. Actually the amount of content (also considering the many mini games) it seems to be truly boundless and the care taken by TT Games – also as regards the many easter eggs – is really palpable from the very first moments of the game.

There is also no doubt as to the quality of the technical front, especially as regards the quality of the models, textures and lighting effects that convinced us even during our first test (took place in the cloud, so we do not dwell on the frame rate speech). To close we point out that the game is fully dubbed in Italian. We therefore wait to try the TT Games title again before giving a complete judgment (and we didn’t want to go into the preview too much for this very reason), but first impressions are certainly very positive.