Leave the house, your robot vacuum cleaner starts cleaning automatically without you having to do anything. While cleaning he notices that your dog has left a surprise, but instead of passing over it he notices and sends you a photo to warn you. This is not a movie, but one of the scenarios that could happen with the new one iRobot Roomba J7 +top of the range that is positioned betweeni7 + tried a few years ago and theS9 +.

The new vacuum cleaner evolves in a radical way compared to those that preceded it with new functions and above all it is the first to bring to the market all the novelties of the Genius 3.0 platform. This means not only artificial intelligence but greater automation, also assisted by the new self-emptying basemore compact and beautiful to look at. 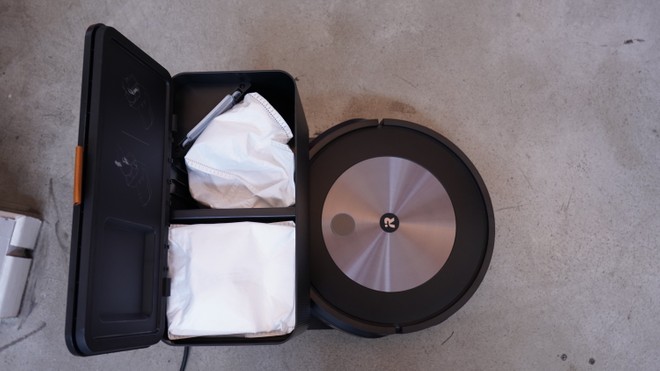 At first glance iRobot Roomba J7 + is not unlike its predecessors but there are some interesting news. The constructive care and weight are surprising, higher than some competitors of the same range. It is made of plastic with a two-tone top. The center is reminiscent of aluminum, while the perimeter has a glossy finish that tends to collect dirt and fingerprints. The single multi-function button surrounded by a multicolored LED allows you to initiate the pairing process, cleaning or returning to base.

At the front there is one of the biggest news. A video camera embedded in a recess in the front bumper accompanied by an LED. The iRobot’s PrecisionVision navigation system it has always suffered from a lack of light and the LED, which turns on during cleaning, makes up for this gap.

The equipment is completed by counter-rotating brushes with patented AeroForce technology and a single side brush. There are also six fall arrest sensors along the perimeter and an ultrasonic sensor for carpet detection. On the dust collection tank you can see the silicone valve that allows the sucked up dirt to flow out. 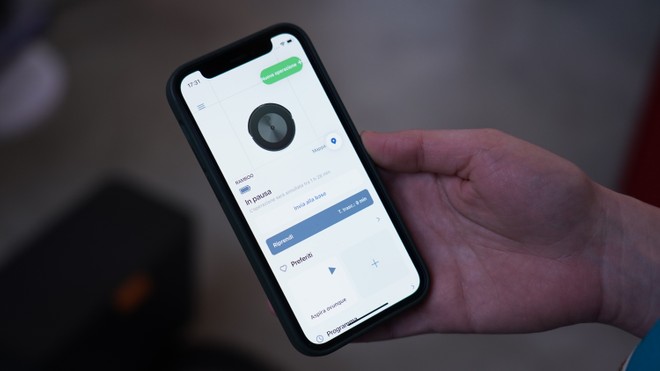 The Genius 3.0 platform is constantly evolving and generation after generation includes new features. Among the most useful functions is the possibility of starting the robot automatically when we leave the house, using the geolocation of our mobile phone. It can match the Braava Jet M6 floor cleaning robot in order to start it immediately after Roomba J7 + finishes cleaning, or configure the robot in an advanced way with other devices connected via IFTTT. For example, cleaning can be started when the garage door is closed between 10:00 and 12:00 on weekdays.

We talk about the platform in that development and new functions are device independent And they are updated remotely on all compatible robots (that is J7 +, I3 +, I7 + and S9 +). To configure all the options you need to download theiRobot Home application, available for both Android and iOS devices.

The graphics are intuitive and simple and all the traditional functions of the most modern robot vacuum cleaners are included. Daily and hourly programming, customization of the created map, compatibility with Google Assistant and Amazon Alexa voice assistants and control of the state of wear of the components with the possibility of purchasing spare parts directly from the application. The robot can be shared among family members for multiple management. 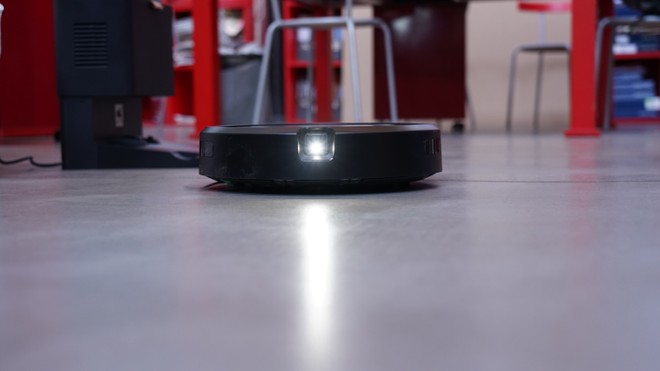 The navigation and mapping system of iRobot Roomba J7 + is based on the presence of the front camera with Precision Vision technology. The robot takes a few cleaning cycles to be able to build a map of the environment in which he works. The duration of this process depends very much not only on the size but also on the subdivision of the area.

The created map does not reach the accuracy guaranteed by LIDAR technology and the camcorder suffers from reflective or very dark surfaces. Through the application you can divide the rooms, rename, insert areas where the vacuum cleaner does not have to clean, the so-called virtual walls. You can also select the cleaning of individual rooms rather than the entire area via the application or via voice command. Improved navigation in the dark thanks to the LED.

However, the particular system guarantees a continuous evolution of the registered map. In fact, the robot is able to recognize any changes to the spaces, or the presence of objects that were not there in the previous cleaning. For example, if we add a vase in the hall, the robot ignores that area, takes a picture and asks what to do through the application. A particular system that learns and improves over time. It is also able to recognize small objects, cables but also pet feces. The recognition works well and also in this case the dangers are signaled via the application. 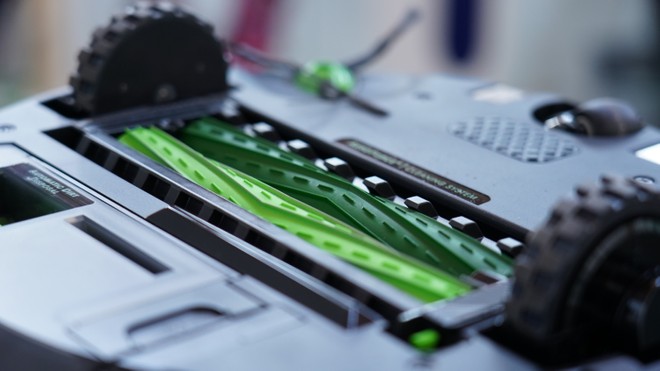 Roomba J7 + guarantees a suction power 10 times higher than the 600 series and integrates a series of technologies that allow the robot to allocate efforts intelligently. Through the Dirt Detect function, Roomba J7 + is able to understand which are the dirtiest areas, wasting less time on cleaner areas. The algorithm is quite effective in this and the two central brushes do the rest. AeroForce technology allows you to pick up animal hair and long hair without these twisting around the silicone brushes. The effectiveness is remarkable and at the moment the only other robot able to guarantee the same performance is theEcovacs T9 AIVI that we testedwhich integrates the same brushes.

The robot is able to avoid most obstacles, although on a couple of occasions it got stuck due to a short cable. It also cleans carpets well, both short-haired and long-haired. In this case the side brush is blocked, the central brushes adapt the rotation speed but the suction power increases. The application does not allow you to choose the power, but the robot does everything automatically by adjusting the suction depending on the surface and the dirt encountered. Overall the experience is better than the previous i7 + and the addition of the LED allows the robot to work better even in the dark. 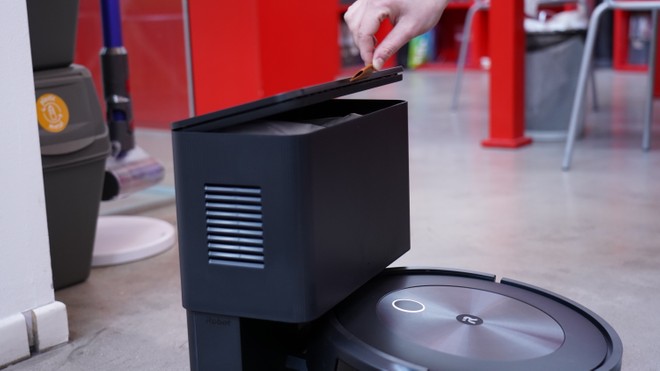 One of the novelties that came with the J7 + is the new self-draining base. More compact and with squarer shapes but above all cleverly designed. The operation remains the same as many other bases with similar function, but with reduced dimensions. iRobot uses AllergenLock bags, however, which prevent dust from escaping and guarantee maximum hygiene during replacement. Also included in the compartment is a space to store extra bags, so you don’t have to search for them around the house when needed. The iRobot branded leather flap that facilitates the opening of the door is nice. The cost of the bags is 19.99 euros for three unitsbut there are several more affordable third-party alternatives.

The Roomba J7 + autonomy front is not particularly striking. The included battery is 2210 mAh (32Wh) and lets you get to just over 80 minutes of autonomy. A result lower than the 3 hours achieved by other high and medium-end robots. If a recharge is not enough, the robot returns to the base to recharge and start from where it left off, in order to cover the entire surface. 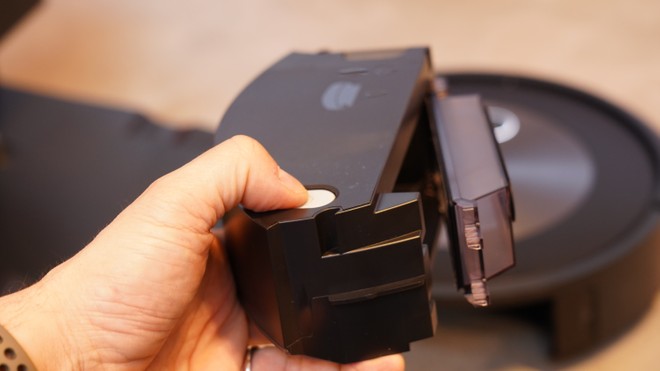 iRobot, as well as Apple and GoPro, are among those companies able to tie their name to the entire category of the sector. It is not uncommon to hear the Roomba name associated with a robot vacuum cleaner from another brand. In the collective imagination the company’s robots remain very strong and the J7 + is no exception. With a list price of 749 euros for the version without CleanBase and 999 euros (899 in promotion) for the bundle it is impossible, however, not to make comparisons with other top of the range.

We recently saw the Dreame W10 that unites as never before the concept of floor scrubber and robot vacuum cleaner, or theEcovacs T9 AIVI which in addition to allowing excellent cleaning using iRobot technology, also integrates a surveillance camera. However, the Roomba J7 + could be of interest to those users who really want a robot that is almost completely independent.

Beyond the configuration and the options for the automatic start of the cleaning, there are no customizations that could make the interaction with the robot more complex and this is a point in favor for many users. When you leave the house, the robot knows it has to leave, it knows the area, identifies obstacles, adjusts the power and if it encounters obstacles, it tells you with a notification. It is a simpler and more direct user experience, which takes care of the point without giving up an excellent level of cleanliness especially for those who have pets at home.