Honda brings the eleventh generation of the Civic to Europe where it will only be offered in the e version: HEV Full Hybrid. The new sedan will be available on the Old Continent market starting from autumn 2022. For the moment, prices for Italy have not yet been announced. Let’s see, therefore, the main details of the new hybrid sedan communicated by Honda. 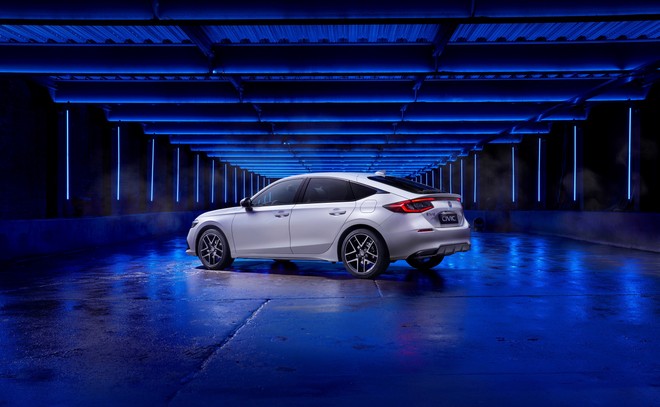 The European version of the new Honda Civic does not differ much from the model that already debuted last year in America. Thus, we find a car with shapes inspired by those of European sportbacks with a roofline that drops like in the coupé. Compared to the previous generation, the hood line is 25mm lower and the windshield offers a wider view. The grille has been redesigned and has a more marked horizontal development. The new LED headlights feature a slim design.

The side mirrors are placed directly on the doors to improve visibility and thus reduce blind spots. The new Civic introduces a novelty regarding the tailgate. The builder says it is made of resin. Thanks to this choice it was possible to reduce the weight by 20%. This way, it is easier to operate.

Speaking of the cockpit, the wheelbase longer than 35 mm made it possible to improve the space for passengers. The new dashboard of the sedan has a horizontal development where the metal air vents with a honeycomb pattern stand out and extend along the entire length. Starting with the Advance trim level, the instrument cluster consists of a 10.2-inch display. 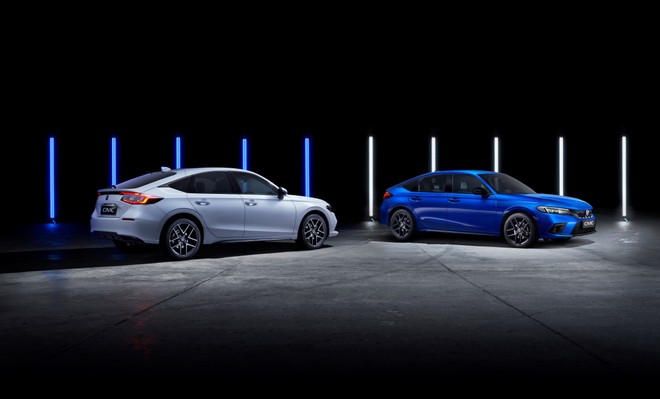 As for the powertrain, Honda has limited itself to saying that the new Civic e: HEV has two electric motors combined with a 2.0-liter direct injection engine and Atkinson cycle. Available as a whole there are 135 kW (184 hp) with 315 Nm of torque. The lithium-ion battery, the capacity of which has not been declared, is made up of 72 cells. The benefits have not been communicated. However, given the powertrain numbers, it is likely to come strictly from that of the Honda CR-V (power and torque are the same).

There are three modes of operation of the powertrain: EV, Hybrid and Engine Drive. In the first, the battery powers the electric drive that moves the wheels. The thermal unit remains off. Even with the accumulator fully charged, it will be difficult to be able to drive more than a couple of km at low speeds in electric only.

When driving at a constant high speed, such as on the motorway, the system works with only the internal combustion engine (Engine Drive) because it is the most efficient for that scenario. If further acceleration is required, for example when overtaking, the car will switch to hybrid propulsion to achieve a further increase in performance. Furthermore, in Hybrid Drive mode, the energy of the generator, driven by the petrol engine, can be transferred to recharge the battery, offering additional benefits.

These three operating modes are managed directly by the new and compact control unit, located in the hood. The battery, on the other hand, is located under the rear seats. The driver can choose between the 4 driving modes Econ, Normal, Sport and the new Individual, which modify the behavior of the engine, the fixed-ratio transmission and the control panel.

According to Honda, the new Civic catches up CO2 emissions below 110g / km and below 5l / 100km in WLTP tests. Speaking of safety, the car is equipped with the new Honda SENSING package which includes a new 100 ° wide-angle camera and improved recognition technology for pedestrians, traffic signs, limits and other vehicles, including bicycles and motorcycles. In addition, for the first time this model is equipped with sonar sensors: four at the front and four at the rear.