In the world of amateur photography, the snapshot sector is more in turmoil than ever. The fascination of the physical shot, to be touched and gazed with the hands as well as with the gaze, has never yielded to the advance of technologies and trends. This is also thanks to devices with a retro flavor but with an avant-garde spirit that satisfy both champions of dives into the analogue past made of films and prints, and newbies intrigued by a more anachronistic way of capturing the image of reality.

And if the “Polaroids”, erroneously assimilated par excellence to one of the most active brands in the sector, are experiencing a new golden age, it is not only thanks to the amateurs of the genre (among which the very young stand out above all) but also to the producers always ready to churn out new models and solutions.

He knows it well Fujifilmamong the reference companies in the segment, which a few months after the launch of the Instax mini 40 and Instax Link Wide, brings to the market Instax mini Evo Hybrid, a hybrid snapshot with a lot of personality that is the heir of the Mini Li Play. She was my faithful travel companion in Barcelona during the Mobile World Congress in combination with the films Instax film Macaron and I tell you about it in this review.

The latest addition to Fujifilm is an amarcord of the brand’s mirrorless and compact cameras and maintains continuity with the design of its younger sister Instax mini 40 (which we reviewed HERE) and the older mini 90. The lines with a vintage flavor are in fact a clear reference to iconic models of the past, such as the FinePix X100, of which he has taken up the finishes and the optics with metallic ring. A different design from what we are used to seeing in the competition, which prefers more cartoonish and colorful finishes (a line also shared by Fujifilm with the first models in the range).

The squared edges facilitate ergonomics: the instax mini Evo hybrid is slim (87 x 122.9 x 36 mm), it is easily handled thanks to the non-slip cover and the weight is quite low (we are about 285 grams). Aesthetically, nothing to say, it is beautiful, but in my opinion there is one flaw: the materials. The plastic shell repeats the same false and “toy” effect that penalized the previous generation, accentuated by the imitation leather texture, as well as the metallic details that do not reassure from the point of view of resistance.

MANY KEYS, MANY FUNCTIONS 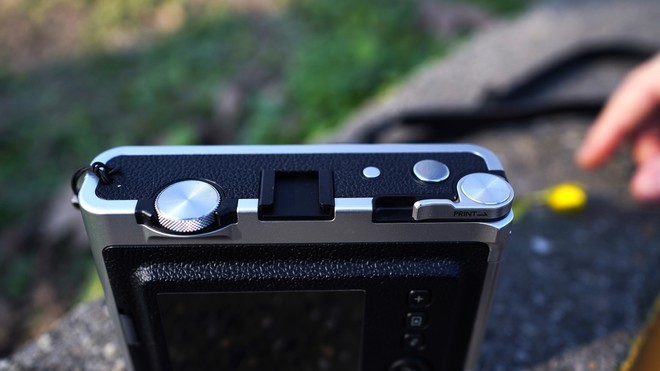 In addition to the lines, the retro mold is also given by the numerous physical keys scattered around the device, which perhaps make it less intuitive than other more essential models, but which introduce a wide range of functions and methods of use. One of the strengths of the brand’s latest snapshot are in fact the two dials that allow you to select up to 100 creative combinations: by rotating the front lens – fixed, 28 mm F / 2 – it is possible to choose one of the ten shooting modes (vignette, fisheye, out of focus and many others), in synchrony with the ten film filters to be set through the upper ring that follow Fujifilm classics.

Present, as in the mini 40, it is front mirror to facilitate taking selfies, especially useful for group photos. To review the location of the power button, exiled at the bottom right and rather difficult to find immediately, as well as uncomfortable.

I found it funny the lever that prints the selected shot if moved with the thumb to the right (the sound that accompanies the gestures is a pleasure). Also commendable double shutter button: the front one is dedicated to the portrait, the one positioned at the top right is for the landscape, both easily reachable with the fingers. The upper part is completed by a slide for positioning the accessories and a small button to save the settings. 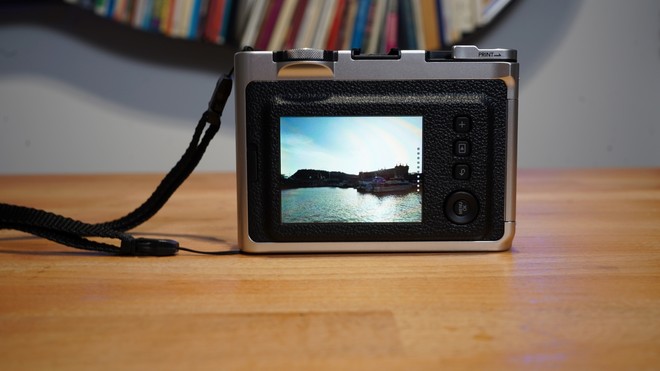 If the appearance of the Evo hybrid is analog, its soul is Very digital. Proof of this is the absence of the viewfinder, replaced by a 3-inch LCD display in color positioned at the rear of the camera next to a vertical triptych of buttons and a navigation pad. The brightness of the screen is good (even in the sun), the amplitude sufficient but – reproach me if I’m pretentious – if it had been touch, it would have earned many more points.

The peculiarity of this camera, as well as one of the most appreciable advantages, is the possibility of select the shots you want to print, as opposed to traditional snapshots that print the image a few moments after the shot without any possibility of intervention. Therefore, the “good first” principle and the surprise effect that have always governed the instant photography sector collapsed, to the delight of perfectionists and thrifty people (films cost!).

The shots are filed on a small internal memory that supports up to 45 photos but which can be extended via the slot microSD integrated. Here emerges the dual and versatile nature of this instant camera: the images can be edited and customized before giving them physicality in two different ways: by adjusting the basic settings before shooting, or once the shot is completed via the smartphone.

It is indeed possible transfer the image from the camera to the smartphone via Bluetooth through the dedicated app and post-production from mobile. You can adjust the cut, brightness, contrast and saturation, but also rotate the image or add filters in a very simple and intuitive way. For those wishing to use the Evo hybrid as a small portable printer, such as its cousin Link Wide, they can select the photos in the gallery of their smartphone and send them to print in a few taps. Alternatively, the photos can also be imported “physically” into the camera via the microSD.

The camera is equipped with a 1/5 inch CMOS image sensor with primary color filter (to make a parallelism with the mobile world, it is three times smaller than those mounted on today’s smartphones), a 28 mm lens with F2.0 aperture.

The shutter speed fluctuates between 1/4 and 1/8000 of a second with ISO between 100 and 1600, so shots at night or in low light clearly require the flash. If the ISO value adjustment and shutter speed are automatic, the exposure and white balance can be adjusted manually from the menu instead. All details below: 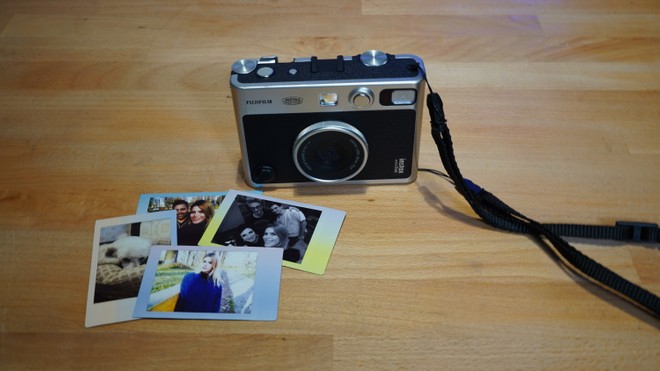 The Instax printing process takes approx 16 seconds in Instax Natural mode and about 23s if Instax Rich mobility is set right after boot. The quality of the shots is very good, perhaps the best ever seen on a product of this category, especially in excellent conditions of good brightness (but it also satisfies in dim light with the flash activated). The images, which have a resolution of 2560 x 1920 pixels, they are sharp and precise, the tones are bright, the definition is fine. It does not disappoint even the dynamic range, much more similar to that of a digital camera than an instant camera.

Regarding the filmsthose compatible with the latest addition to Fujifilm are the traditional ones instant film “instax mini” (sold separately), to which is added the new film Stone Gray which replaces the classic white edges with a gray color with marble veins (the cost is about 12 euros for a pack of 10 sheets). Perhaps, for such a camera, larger films would have been more suitable.

In any case, their insertion into the compartment takes place easily and the joint is almost immediate even for those less familiar with this category of devices. 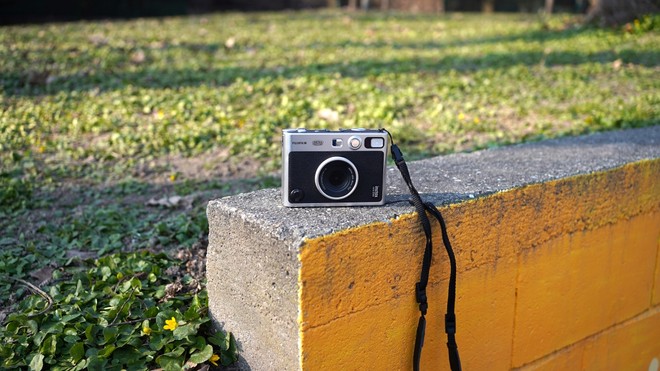 The Evo Hybrid arrives on the market for just over 199 euros (on Amazon it is slightly lowered), a certainly high price for an instant camera, not entirely justified by the good performance of Fujifilm’s new entry. However, considering the small gap that separates it from the Link Wide, launched at around 150 euros and limited to the print function only, it can be considered an acceptable figure.

The new Instax mini Evo hybrid is the perfect link between an instant camera, a portable printer and a digital camera. Compact, handy, digital, this little hybrid camera is definitely a step ahead of the competition.

I very much appreciated theabsence of Stilo batteriessupplanted by an integrated lithium-ion battery, but it is a pity that the latter must be recharged via one microUSB port (in 2022 a USB-C is almost a must).

Of course, immediately guessing how to use the product is not obvious and, before acquiring the right confidence to fully exploit its potential and functions, we need to tinker a bit. Once inside the mechanism, however, it will be very difficult to go back. Not only for the variety of creative combinations, which allow you to take more imaginative photos than simple snapshots that show the naked and raw reality in “direct” (how boring), but also for the presence of the display (with all the advantages that it entails ) and for the excellent image quality.

Does this make sense? If you are looking for an instant camera with a (quite a lot) extra quid and are willing to spend a slightly higher amount, absolutely yes. Alternatively, the offer of the brand – but also of the competition – is rich and there are numerous models that are more accessible and less performing, but still qualitative.

Not very easy to use at first