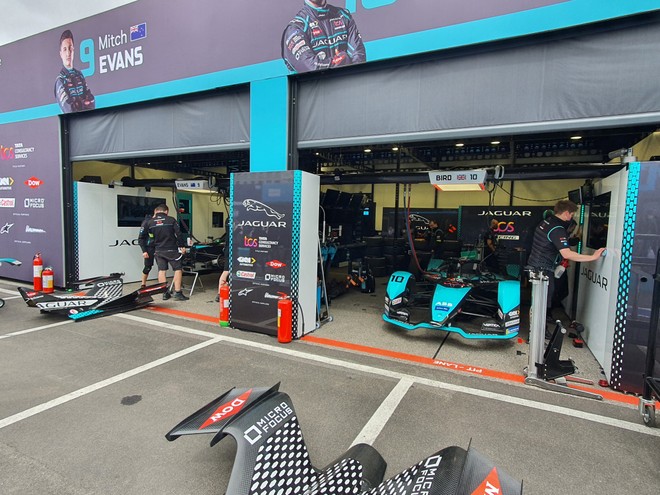 With its 3.83 km, the circuit created between the avenues of the EUR in Rome it is one of the longest and most demanding of the Formula E World Championship. 19 variable speed corners with multiple overtaking possibilities that require single-seaters with a perfect setup to allow for the best possible performance. Thanks to Jaguar we were able to go and closely follow one of the two races of the Rome E-Prix. An opportunity to also take a look at the “behind the scenes” to better understand this environment.

Formula E was born with the aim of creating a zero-emission series capable of raise people’s awareness of sustainability and show the potential of electric mobility. A championship that wants to send an important message to accelerate the transition to a new form of more sustainable mobility.

But this series it is also a large laboratory where car manufacturers can experiment with all those solutions that they will then bring into their production cars. After all, motorsport has always been considered a perfect place to test new ideas and technologies. On these single-seaters, therefore, we will be able to find those technical solutions that in the future we will also see on normal battery cars sold in dealerships.

In addition to the aspects of sustainability and development, Formula E is also real competition, with pleasant races to follow, where the show is not lacking. 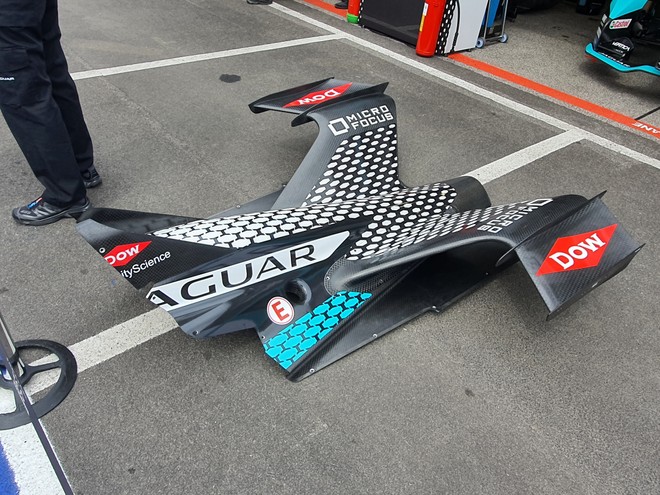 Formula E was conceptually born one evening on March 3, 2011 when Jean Todt – that we all know well – met with Alejandro Agag who is now the CEO of Formula E. During the meeting, some ideas were put together which then led to the creation of this series.

The official debut then took place in 2014 with the start of the first season. 8 years have passed since then and the championship has reached its eighth season. We have come a long way and the single-seaters have made important steps forward becoming progressively faster and more competitive. A further important leap forward will be made next year with the arrival of the Gen3 of electric single-seaters. There will be several innovations including the possibility of having more power than today. Hence, next year should further improve the show thanks to the better performances. 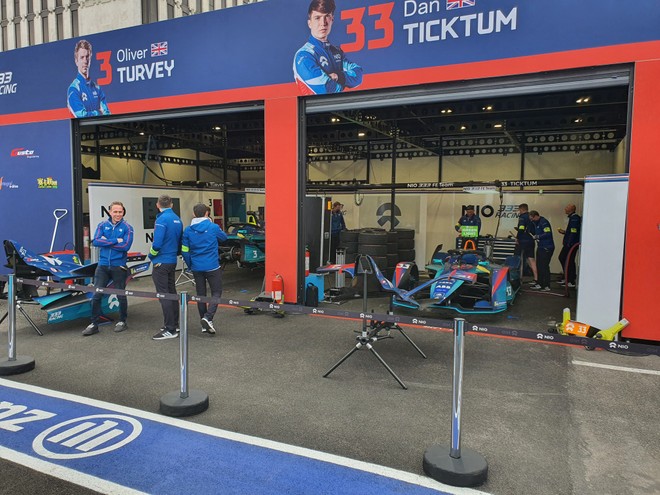 One thing we noticed and that struck us positively it is the environment. Motorsport can be an elitist environment. Formula E, on the other hand, is much more open to enthusiasts with drivers and team members willing to exchange words. The day before the race, for example, we had the opportunity to chat with some members of the Jaguar team in a completely informal way, talking not only about the cars and the race but also about other things.

Precisely this ease of approach makes the Formula E environment even more passionate, which in Italy would probably need a little more visibility to make itself known better by motorsport enthusiasts.

THE QUESTION OF ENGINE SOUND 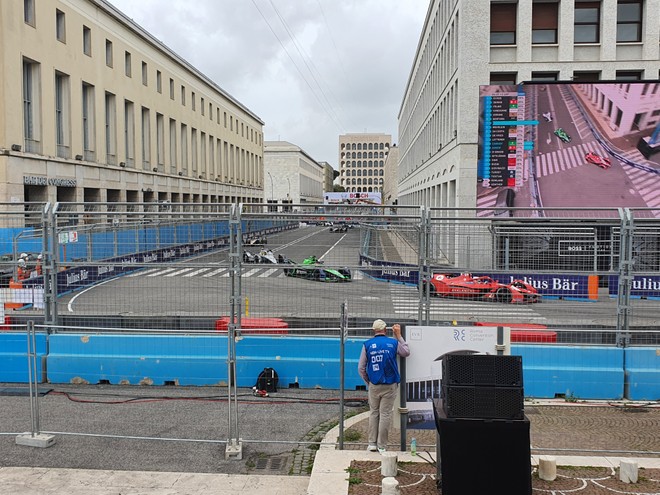 Because speaking of Formula E you always end up on the question of engine sound. For many people, the absence of the internal combustion engine is unforgivable and without this sound the races are not real races. Certainly, this must be said, Formula E is not suitable for those looking for an old-style sound emotion from the single-seaters.

But that doesn’t mean that competitions can’t be fun. The race we have witnessed it was really enjoyable with several overtaking and battles on the track. Compared to the first seasons, also from the point of view of the show many steps forward have been made and next year, as mentioned, much more is expected thanks to the new cars. 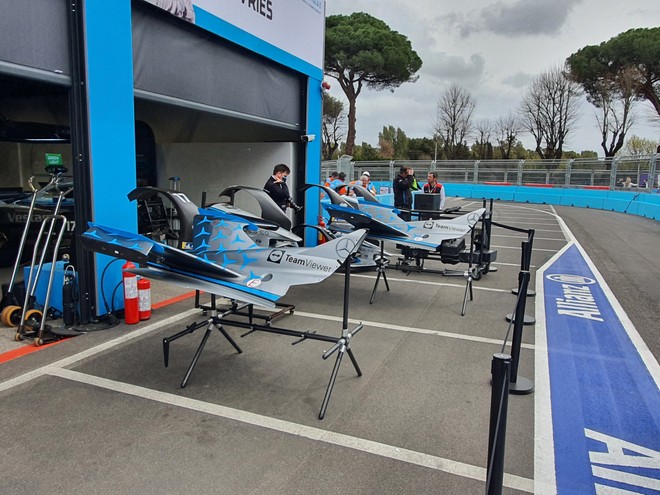 Then everyone can think of it as they see fit. Reading the comments I realize that many do not have a good opinion on this series but I wanted to give it a chance without starting biased and I enjoyed it. Of course it’s not Formula 1 but I wasn’t expecting something like this either.

The fact that each race takes place over a single day with qualifying in the morning and the race in the afternoon makes it all the more exciting. Nice for spectators who can follow the entire race in a few hours and certainly complex for teams and drivers who have to tune the car and manage all the problems in a short time. 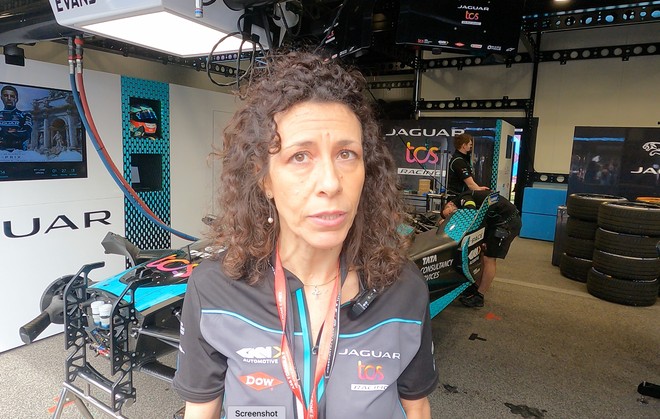 Formula E is a perfect date for car manufacturers to bring new things to electric cars. In this regard, we cannot fail to mention that we ran into the Maserati Grecale Folgore, of which we have shown a series of images via it.

The tenders are also an opportunity to further explore the theme of sustainability. Between the end of Saturday’s E-Prix practice and the race we got to talk with Rossella CardoneJaguar Land Rover’s sustainability manager, on the objectives of the Group he works for.

We asked what Jaguar Land Rover’s recipe is for achieving sustainability goals. As you will soon see in the video of the interview, Rossella Cardone told us how the final goal of the Group is that of zero CO2 emissions by 2039.

But before then already by 2030 they intend to reduce the CO2 produced by 46% at the production level and by 54% along the value chain. We could not fail to deepen the theme of second life and battery recycling, which is being discussed more and more today.

The English Group is working for extend the life of the batteries, in order to be reusable in other sectors such as energy. When the car ends its life cycle, the battery can still be used. For this they have carried out projects that demonstrate that the battery can have a second life cycle as a storage solution. For example, in collaboration with Pramac they created a system called Off Grid Battery Energy Storage System (ESS) which was used as a storage unit to power the equipment of the Jaguar TCS Racing Formula E team in some circuits.

To reduce CO2 emissions, the Group will also work to improve the efficiency of production processes and reduce energy consumption within factories. In addition, luxury and quality materials will be used on the cars but also recycled. All without forgetting the vehicle electrification project. The cars will be designed from the outset to be easily reused and to be able to recycle every single component once they reach the end of their life.