Here we are: finally EA announced that cross-play on FIFA 22 will soon be a reality. Better late than never, of course, even if in the meantime the real football season is drawing to a close. But clearly EA’s move is aimed at bringing the function to the next chapter already from day one, which we do not call FIFA 23 as it would be natural since, in all likelihood, the license for the use of the brand will not be renewed, and there we will find in front of an unreleased EA Sports FC (in full, EA Sports Football Club).

Before the introduction on a permanent basis, there will be a testing period. At the moment there is still no precise date: EA simply says that the whole will begin “very early” through the release of a specific update. The platforms affected by cross-playand whose players will therefore be able to compete, are PlayStation 5, Xbox Series X | S and Google Stadia.

IN THE FUTURE ALSO ON OLD-GEN AND PC

In this testing parenthesis cross-play will be about only Online Friendlies and Online Seasons: EA has therefore chosen a gradual and conservative strategy, but the goal is to introduce the function as soon as possible also on FUT and other competitive modes, as well as extend it to PS4, Xbox One and PC.

EA has also already released the instructions to activate cross-play (which will therefore not be enabled by default: it will be up to the players to choose whether to use it or not) once it is released. To take part in the test, simply open the widget that will appear in the game’s start menu, et voilà. 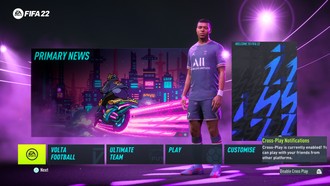 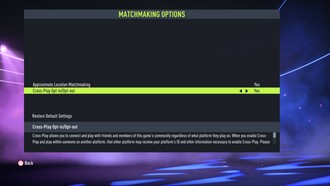 After activating the cross-play it will then be possible to play with users of the different platforms involved in the test and also add them to your friends list using the nickname they have chosen on their respective online services or the one linked to the EA account.