From the quarterly data just published by Meta it is possible to extract various information: first of all that in 2021 the company led by Mark Zuckerberg increased revenues by 37%, and then that all the parameters used to calculate the user base of the platforms that are part of the ecosystem are growing, with values ​​between 4 and 9%. But there is a detail that most could miss by quickly scrolling through the documents that summarize the financial situation in the quarter and throughout the past year. And in the midst of all these “more” it certainly clashes. 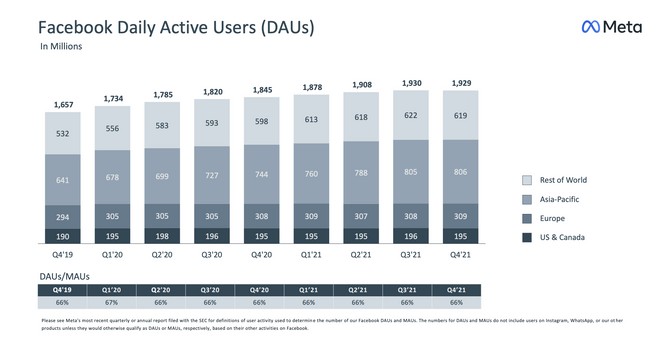 It goes without saying that the Menlo Park company has closed a significant growth in 2021 characterized – among other things – by the crucial change of name, behind which the intention to focus on new goals (metaverse above all) is not too covertly hidden and to shake off the image of reality not reliable in terms of privacy which it has earned from Cambridge Analytica onwards.

However, it remains interesting to go for a comparison with the previous quarter, since up to now the data reported have been compared on an annual basis and, as we have seen, have highlighted an increase in all the main parameters. In short, the discordant note comes from the data SADi.e. users active every day on Facebook.

At first glance it might seem like a small decline – and, in terms of cold numbers, it is – yet it represents one a reversal of the trend that has not been seen for years. The graph above is quite eloquent, and shows how at least since the last quarter of 2019 the trend has always been growing, rising from 1.657 billion daily active users to a record 1.930 billion in the third quarter of 2021. And now, for the first time, there is a contraction.

The data can be separated further, going to see where the decline was most significant: in essence, the markets that recorded growth were the Asia-Pacific area and Europe (in the Old Continent the SADs are 309 million). The “minus” sign is found under the heading “Rest of the world” e North America.

And here we connect to another problem encountered by Facebook: 1 million fewer daily active users in the United States and Canada means lower advertising revenueand this worried the markets which expected higher revenues than what actually happened (32.639 billion dollars in Q4, 114.934 billion in 2021), so much so that immediately after the publication of the fiscal results the Meta stock fell by 20% , to then gradually recover ground over the following hours.

What will happen in 2022? Meta expects a growth that will be threatened by various macroeconomic factors, and concerns are expressed by the management regarding the continuing uncertainties regarding relations between the USA and Europe regarding the processing of data from users of the Old Continent that end up being fed to the servers. Americans.