Also Elon Musk wanted to have his say on the news of the moment, or the historic drop in Netflix subscriptions, the first in ten years. And what is worrying are not so much today’s numbers, but those forecast for the near future, which still describe a negative trend, with a possible reduction in the number of subscribers by an additional 2 million in the second quarter of the year.

All data that have shaken investor confidence, and so inevitably came the backlash on the financial market, with the Netflix stock registering a vertical collapse in the stock market by 20% on Tuesday: in the following hours the crater became even deeper, and as we write the article the numbers are even more merciless and say -35.12%.

What does Musk have to do with all this? Nothing, until he decides. The good Elon has recently chosen to take action on the political front, obviously in his own way: and so after having harshly criticized Twitter he has acquired over 9%, attempting a climb that is meeting the internal resistance of the social network’s board.

Waiting to know if he can get his hands on Twitter, Musk hasn’t stopped tweeting. And he has directed his attention to the Netflix case, raging on the company’s difficult moment and taking advantage of it to remove a few pebbles from his shoe.

If for Netflix the reasons for the drop are to be attributed to the increase in the price of subscriptions, the issue of sharing the password of the accounts, the war in Ukraine and the choice to exit the Russian market, for Musk the cause is another. In fact, the tycoon with his controversial tweet pointed the finger at the “woke mind virus“which according to him would make “Unwatchable Netflix“.

WHAT IS THE WOKE IDEOLOGY

“Woke mind virus“is a formula that it would be wrong to translate literally with”awake mind virus“The pandemic obviously has nothing to do with it, and Musk refers to the “woke thought virus“ or, if you prefer, “of the woke ideology“: to better understand what he means, however, a quick introduction is needed.

“Woke“, indeed, it is a term that should not be translated as it indicates an ideological space and a well-defined clash between opposing political areas, in particular in the current US scenario. The political use of “woke“has its roots in the 60s and, after having remained dormant for decades, has recently re-emerged with arrogance in public discourse, becoming one of the references around which the polarization of political life in the stars and stripes develops.

Liberals in fact make a positive use of it, to define those movements – such as Black Lives Matter and Me Too – which protect the rights of the oppressed and minorities, while outside that area it is used with a negative meaning to indicate extreme drifts. and persecutory of the politically correct, such as the cancel culture. 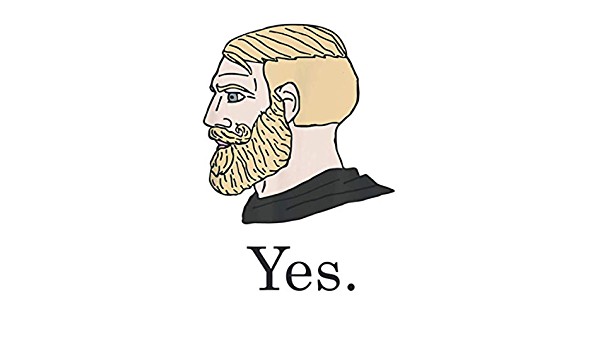 And therefore Who is Musk with? With Netflix and its “rainbow policies”with the productions that conceive more and more products under the hood (for oppressive Musk) of the politically correct and its rules, which push to create harmless stories and to stifle creativity for fear of hurting some category and being submerged by social storms, and with the anxiety, if anything, of feeding them and coaxing them by giving them what they want to eat.

To put it in a popular motto, the meaning of Musk’s intervention is “get woke, go broke“, that is”do the woke, go bankrupt“. To a user who perhaps made fun of his statement, perhaps re-launched it, defining the” woke thought virus “as the greatest threat to human civilization, Musk decided to respond by clenching his jaw from chad and cutting it short with a dry – but very sincere – memetic “Yes“.

In short, the principles that move Musk’s war on Netflix are the same ones that moved the one on Twitterwhich on the other hand is the outpost par excellence of “woke thinking”: there are few doubts about this. The question is, if anything, whether Musk has sensed the opportunity in this case too and, as with Twitter, is considering buying large shares of Netflix, taking advantage of the balance prices dictated by the vertical collapse of the shares in recent days. An imaginative hypothesis, but always legitimate when it comes to the richest man in the world.