Elden Ring, FromSoftware’s latest work, had started off well with excellent numbers already at launch. And apparently he continued on that path. Almost a month after day one of 25 February, the software house has in fact shared the data relating to global sales, considering all the platforms on which the game is available: the units sold overall on all markets are 12 millionof which 1 million in Japan alone.

In short, if before the launch one wondered how a soulslike in open world sauce would be received, with gameplay faithful to the genre but with tricks designed to blend it harmoniously with a more marked and far-reaching exploratory component, today we can say that the response from the public and critics was decidedly positive. And probably this signal will push From to develop other titles starting from the formula experimented with Elden Ring.

FromSoftware CEO Hidetaka Miyazaki took the opportunity to celebrate the impressive achievement and thank all the fans:

It’s amazing how many users are playing Elden Ring. I would like to extend our warmest thanks to all of them on behalf of the entire development team. Elden Ring is based on a mythological tale written by George RR Martin. We hope that players will appreciate the high level of freedom as they venture into its vast world, exploring its many secrets and confronting its various threats. Thanks for your continued support. “ 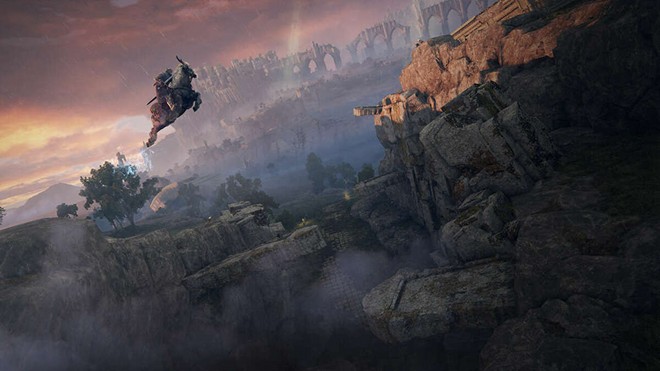 Also Yasuo Miyakawa, CEO of Bandai Namcocommented with satisfaction on the numbers of the latest soulslike, also revealing that the plans for Elden Ring do not stop only in the videogame sector:

Create Elden Ring took a lot of effort to exceed the expectations of our fans around the world. And with the same goal, we will now strive to expand the brand beyond the game itself by bringing it into everyone’s daily life. We will continue to create fun and engagement through entertainment so that we can get closer and better connect with our fans around the world. “

In recent years we have seen how the creation of new franchises aims to shape narrative universes that can also be spent in other areas: just think of CD Projekt, for example, and the Netflix series taken from The Witcher III or the upcoming animated one inspired by Cyberpunk 2077 instead. Miyakawa’s words point in this direction, and a natural development of Elden Ring (but in general for From properties) could just be a dedicated series on a streaming platform.

Perhaps going to dissect some aspects of the narrative framework that in the game are deliberately left to the interpretation of the players, in full From style: considering that the world was built on the basis provided by George RR Martin, the author of the books from which he had origin a worldwide phenomenon such as Game of Thrones (The Throne of Swords in Italy), a series dedicated to Elden Ring seems very likely.