After a few days of delay on the original plans, the Crew-4 launch mission operated by SpaceX on behalf of NASA has finally been successful and the four astronauts, including our Samantha Cristoforetti, are currently on their way to the International Space Station.

The first operations started early in the morning according to our time zone, while the live broadcast started at 06.00. The weather forecasts were immediately favorable and after the classic operations of preparing the astronauts, transporting them to the launch pad at the Kennedy Spacer Center and loading the propellant, which took place about 25 minutes before the actual launch, the Falcon 9 started almost as expected, at 09.54.

The separation of the first stage took place after 2 minutes and 46 seconds from the start and was immediately followed by the start of the second stage, the one that will bring the spacecraft into the correct space for the meeting with the ISS.

The next goal was also hit and the first stage successfully landed on the drone ship “A Short Fall of Gravitas” after about 9 minutes and 34 seconds from the start. At the same time on the Dragon the gravity indicators (for the occasion two soft toys, a turtle and a monkey apparently brought by Cristoforetti) indicated the entry into microgravity. 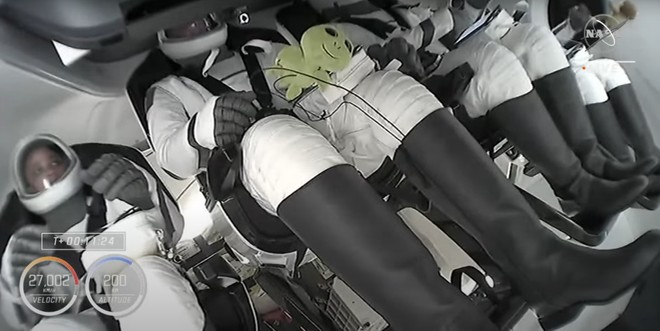 Now that the journey is underway and the most delicate part has been filed, the crew of the Crew-4 mission will have to face another rather delicate step such as that of the docking at the International Space Station. The operation should take place tonight and precisely at 02.15 on Thursday 28 April.

As for the opening of the main hatch which will sanction the official arrival of the ISS astronauts we will have to wait for 03.45. The timetable is not exactly comfortable for us, but those who want to follow the docking and welcome operations by the astronauts currently on board the ISS, all the operations will be broadcast live both on NASA Live TV and on the official SpaceX Youtube channel. .