Birò Share, the electric car sharing service, was born in Procida, wants to conquer other cities and villages in Italy and has an ambitious goal: to eliminate traffic. This is why it can be a revolution, but it requires a total paradigm change and must overcome the most difficult test: acceptance by a population, the Italian one, born with the boom of the owned car, the one that gave the freedom of movement for all social classes.

PROCIDA HAS A PROBLEM 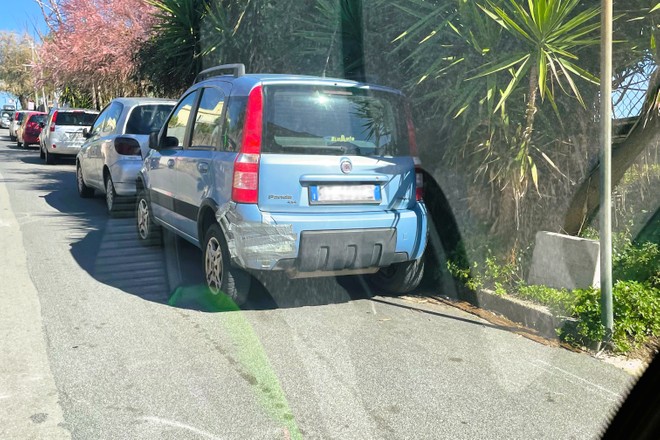 Speaking with the inhabitants of Procida it turns out that the island has a big problemThat of the traffic. Nice discovery you will say, it is certainly not the only one. But with 7,500 private cars, more than 3,000 scooters and an unknown number of light commercial vehicles (all per 10,000 inhabitants), the problem of Procida (3.3 sq km) paradoxically it is more complex than cities that extend over a greater surface area.

The combination is lethal: most of the cars in Procida are compact utilities used for daily errands. Most of the cars in Procida are part of a old circulating park and more polluting than the latest generation cars. On the other hand, it makes no sense to invest in new cars to get around the island: to park it’s impossible, you have to literally crawl on the walls of the houses And every roadside vehicle bears the marks of daily battles for parking.

You then enter a vicious circle where the inhabitants do not want to give up the convenience of the car to move around the island, but at the same time it makes no sense to update the vehicles in circulation because they are real battle cars. The traffic at peak times is unlivable, the incentives for the population are not enough (free buses) and a change of approach is necessary. 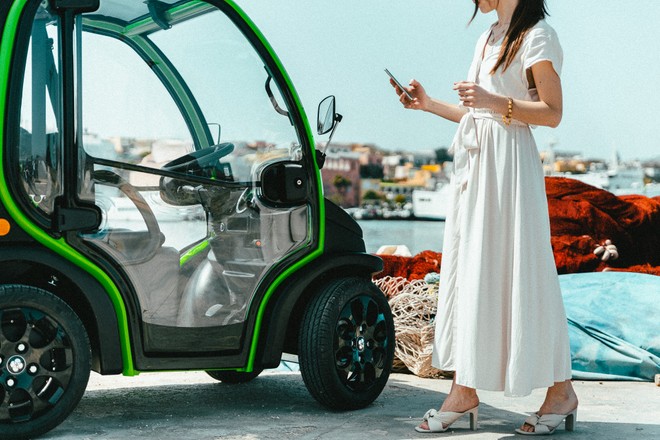 The idea of ​​saving the island through the sharing economy was born from a local entrepreneur, Nicola Ambrosino with Green Way. This is the first case of car sharing with the Birò di Estrima, a light quadricycle that projects the same footprint on the ground as a maxi-scooter when parked (1.03 x 1.74 meters), benefits from four wheels, has a safety cell identical to that of small commercial vehicles and, in recent times, integrates hardware as standard to enable sharingboth public and private.

Birò reaches 45 or 60 km / h depending on the version (electric 50ino or equivalent of a 125 cc), can be driven with a license from the age of 13, is available with a removable 3 kWh or fixed 5 kWh battery. The autonomy is 100 km thanks to the low weight. 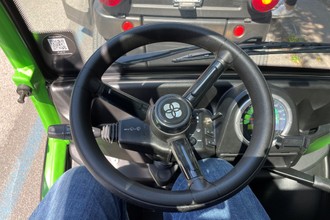 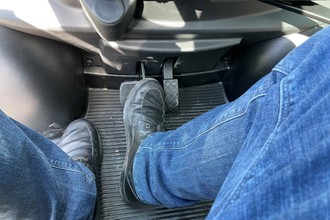 Tiny means uncomfortable: the driving position it forces you to make some sacrifices with your legs if you are tall, they cannot be stretched out. Nevertheless whoever buys it usually falls in love, because it changes his life. At the beginning I can hardly believe it, then I remember the stress of moving to Milanpark mine 4.7 meters by car electric, worry about finding a seat far from the incompetent who do not know how to maneuver and could damage it. And then I understandand I reevaluate the idea of ​​being uncomfortable for a few kilometers and then park with a light heart.

Suspension duretto, not air-conditioned but with a sunroof (in Summer the doors must also be opened when you stop at the traffic lights), Birò is a kart without the advantage of a low center of gravity and with inaccurate steering. Yet he travels that is a pleasure (for the soul): almost funny, he sneaks through traffic with a snap (despite only 4 kW of power) and he makes forgiveness for his faults because, even if you compare it to cars like Amì and Smart, you can really park anywhere.

The fleet started with 10 vehicles available to locals and tourists, but lhe objective is precisely to convince the inhabitants to take their own car out of the equation, at least in a context where this is possible as an island. In fact, we are not talking about cars that are also used in Procida to move around on the mainland, but old utility cars placed on the island only for local needs, which can be met very well with a shared vehicle. 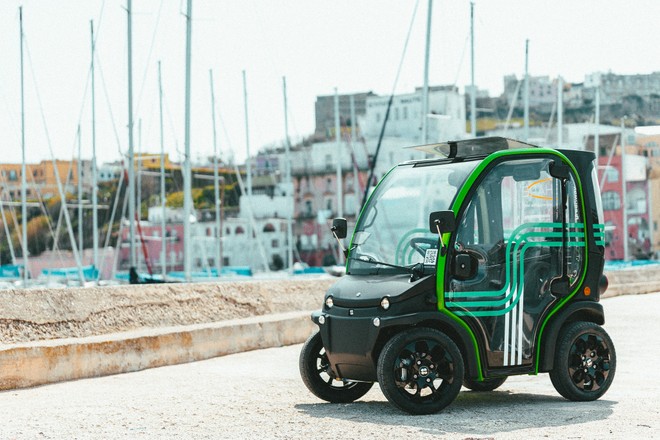 It is not just a car sharing project but the aim is also to positively affect CO2 emissions on the island. The first benefit is inherent in sharing: fewer vehicles on the road means cars that move more smoothly, and therefore fewer emissions.

The second is in the technology: using electric cars shifts CO2 emissions even if the electricity generated is produced with non-renewable sources. Without forgetting that a light and electric two-seater car is much more efficient than a real car who has to carry a huge weight to carry one or two people.

The third concerns the project it plans to power the Biròs in sharing with a photovoltaic system. At the moment, a 6 kW infrastructure is enough to recharge the small fleet of 10 units, all characterized by slow recharging (1 / 1.2 kW) on purpose to ensure compatibility with any socket, without necessarily installing expensive and more complicated columns due to the necessary authorizations.

Energy production and consumption on the island therefore create a circular economy which, when fully operational, will really be able to impact both on CO2 and on the territory.

HOW IT WORKS, HOW MUCH IT COST 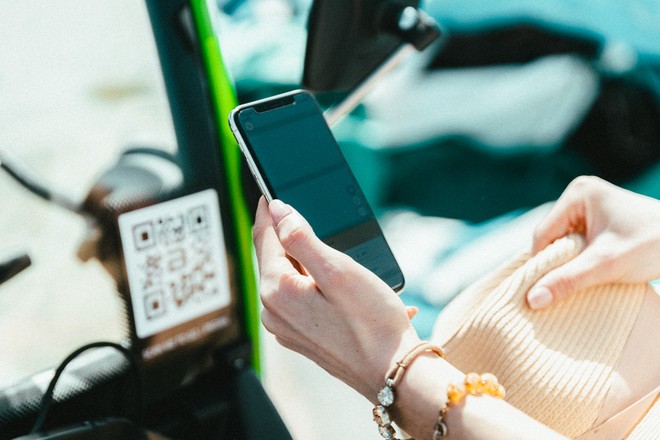 Operation is simple: the app is well done, the procedure is guided in all the steps and the intuitiveness allows you to easily explain how to use it even to those who are not part of the generation of digital natives. After registration, just frame a vehicle in real life (or locate it on the virtual map and book it) and that’s it.

The system is keyless, Birò opens and no ignition buttons are needed: once the handbrake is removed we are ready to go. To end the rental there is a button clearly visible in the app. We click, the software asks us to take a picture of the parked vehicle and Birò is ready for the next customer.

Residents will pay € 0.2 per minute plus € 0.8 for activation while the cost for tourists is 0.5 € per minute with 2 € activation. These are the starting figures, but the possibility of remodeling, special rates and subscriptions should not be ruled out if and when the service takes hold and is enhanced. Estrima Birò can be driven for 14 years with a license, but, for the moment, the sharing service is only enabled for adults. 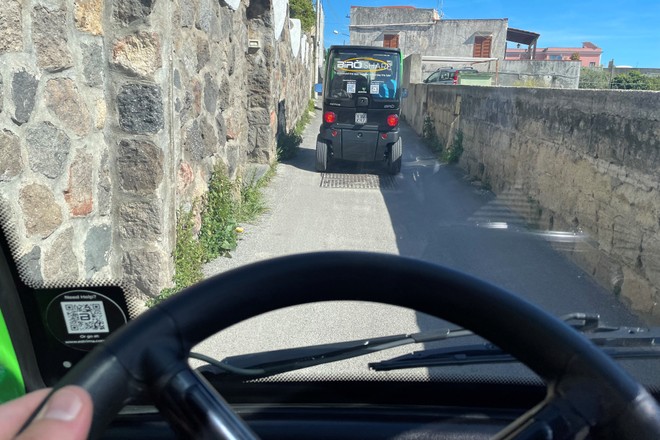 According to a study, hitherto theoretical, with a shared fleet of 50 Birò they can meet mobility needs largely of the 10,000 inhabitants of Procida. On paper it is a beautiful utopia: 50 vehicles will replace thousands.

A small confirmation that we are on the right track came from the rapidly growing number of scooters and electric bicycles in Procida. It is the proofnot that it was needed, that there were many to take the car for short trips because affected by the “severe backside syndrome“, and the arrival of electric micro-mobility represented an alternative.

Now, with small four wheels that offer weather protection and a minimum of luggage space, one could think of squaring the circle. Will it really be like this?