The picture provided by IDC regarding the smartphone market is difficult to interpret. In fact, the analysis reports the data relating tofull year 2021 and tolast quarter – October-November-December – with opposite trends. The first they just confirm the good things previously reported also by Canalys, with year-over-year growth of 5.7% for shipments that reached 1.35 billion units. Seconds (Q4 2021) show a minus sign, with a decrease compared to the same period of the previous year of 3.2 percentage points.

A difficult situation to decipher, it was said, because this is already the second consecutive negative quarter, a sign of an ongoing trend marked by the chip crisis and the difficulties that logistics continue to encounter due to the global health emergency. Yet 2021 was a positive year as a whole, and this can be interpreted as a signal of strength of a sector that, despite everything, manages to keep and, indeed, to gain share compared to the previous year. 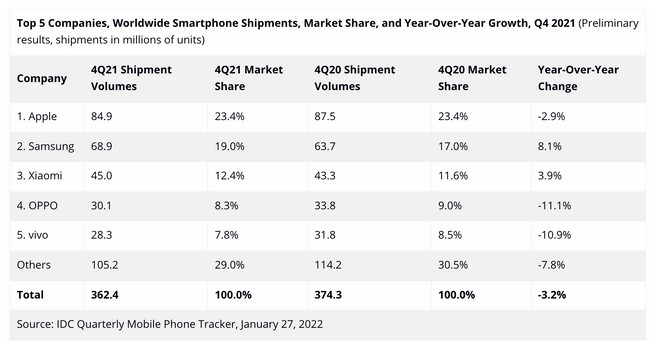 AND Apple to have shipped the largest number of smartphones during the last quarter of 2021, despite a decrease of 2.9% compared to the previous year. Market share is stable at 23.4%, with 84.9 million iPhones shipped. The debut of the iPhone 13 and related mini, Pro and Pro Max variants obviously weighs in, with 40 million units sold in December alone.

BUT THE MARKET RULES 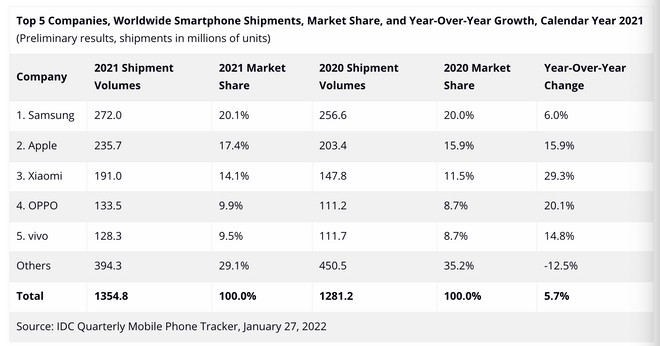 AND WHAT END HUAWEI HAS DONE?

At the end of 2020, Huawei was in third place behind Apple (2nd) and Samsung (1st) with 189 million smartphones shipped all over the world. The decline on an annual basis had been 21.5%, therefore significant, the brand still resisted not only in the top 5 of the main producers, but even among the top three. 2021 was the year in which the company literally disappeared from international radar, thanks to a ban that effectively ousted it from competition and western markets. 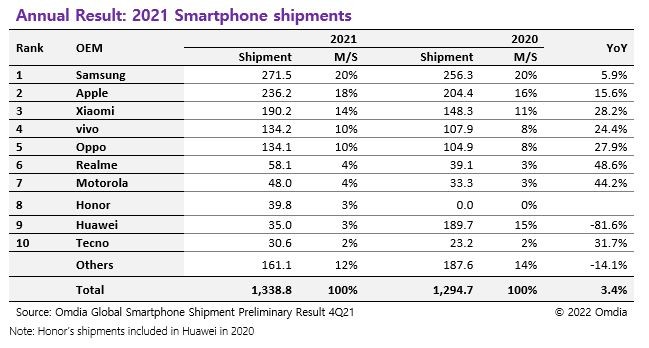 Omdia reports that they would be 35 million smartphones shipped by Huawei in 2021, 81.6% less compared to the previous year. At the same time, the market share fell from 15% to just 3%. Emblematic is the overtaking made by Honor against the former parent company, with 39.8 million units shipped and a share of around 3%.

Observing the data reported by Omdia, we can see how vivo and Oppo have in this case swapped places with respect to IDC estimates. It changes little in substance, with both brands growing strongly compared to the previous year, as well as realme which continues its rise (+ 48.6%) positioning itself ahead of Motorola.