The title may seem ironic but it is not so far from reality, since among the solutions being studied to keep astronauts who will face long journeys in space healthy in the future, there is also that of a transgenic lettuce. Preliminary results were presented by the American Chemical Society at the recent ACS Spring 2022 meeting.

One of the first problems to be solved in the coming years will be the maintaining the health of the first astronauts who will try to reach Mars, and a few years ago we tackled the problem by dedicating an in-depth article to the subject. In reality, the problems associated with a long journey outside the protection of our Earth’s atmosphere would be many, but perhaps the problem of decreasing bone density may finally have found a simple and effective solution.

The idea of ​​the American chemical Society is to propose a genetically modified version of lettuce able not only to nourish but to behave as a real prevention therapy for bone depletion, one of the long-term problems related to staying in zero gravity or microgravity environments (they also experience it on the ISS but in a slightly less marked).

On Earth, the human body is able to maintain a balance between bone composition and the ability to repair mineral losses, which does not happen in space, leading to greater demineralization than recovery. Estimates speak of a monthly loss of about 1% of bone mass, the condition is known as osteopenia.

This is a known effect, which on the International Space Station is fought with physical activity, as it is considered the best natural solution to date to stem the problem. Yet the researchers who wrote this new study say that there is not enough evidence to believe that physical activity is a sufficient measure to avoid the reduction of bone density, and in fact there are more extreme remedies such as inoculation of a parathyroid hormone (PTH). which helps stimulate bone regeneration, but is not the best long-term solution. Like any therapy it has its negative effects, it would also require daily inoculations and therefore a non-ideal modus operandi to be applied to millions of km from the Earth.

THIS LETTUCE WILL BE THE SOLUTION 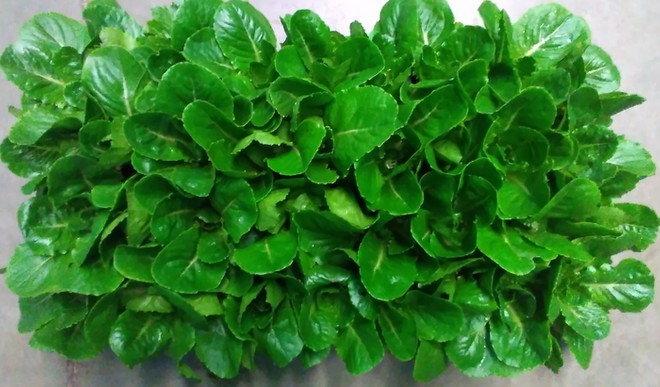 Presented during a media briefing yesterday, this lettuce could represent the most effective long-term solution to combat bone demineralization. This particular salad was chosen because on the International Space Station it was planted several times by astronauts and proved to be able to grow even in prohibitive conditions, moreover the ability to generate many seeds makes it ideal for a long-term production, perfect. in the case of trips lasting months or even years.

How does it work? To increase the stability and bioavailability of PTH in the body, a series of genetic modifications have operated in the lettuce, such as the introduction of a protein (Fc) that increases the bioavailability of parathyroid hormone, as well as a specific gene that increases its production. , making it ideal as an alternative solution to drug administration.

The preliminary results are particularly good and tell us that the plants are capable of producing around 10-12 milligrams of the modified peptide hormone for every kg of fresh lettuce. Apparently about 380 grams per day of lettuce per day would be enough to obtain a sufficient dose of the hormone and adequate bioavailability. Definitely a massive salad fix! Vegans thank you.

Yet this is a preliminary result and, although it has already been produced, the researchers have not yet tasted it for safety reasons, in fact, other analyzes will be needed to certify its goodness. In addition, the PTH-Fc levels will also need to be optimized, and some hope they will be increased in order not to have to ingest quantities of salad that can test the strictest vegetarian.

But the American Chemical Society team is confident that this new transgenic lettuce will taste indistinguishable from that of common salads! And who knows if this solution can also find application in fighting certain degenerative diseases on Earth, we just have to follow their developments and prepare the pinzimonio!